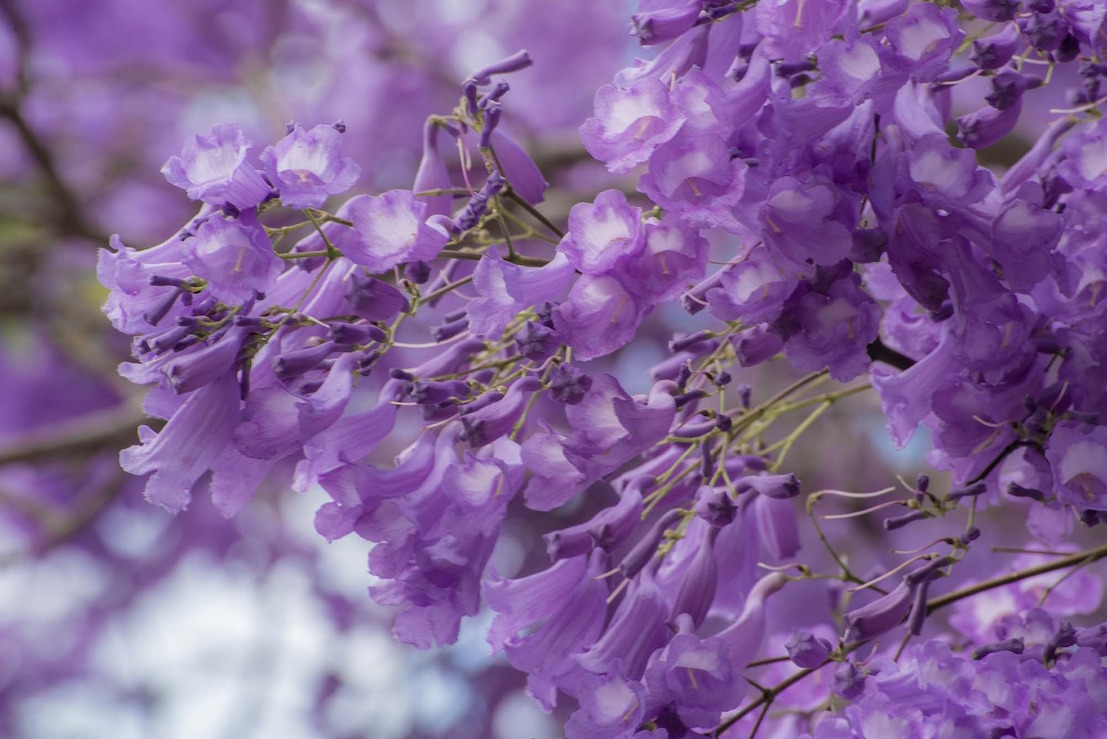 I’m remembering the Jacaranda Festivals of my childhood at Grafton in northern New South Wales, with a certain nostalgia. Did such a time of innocence really exist? Is this celebration different today?

Below is a photo from my sister’s album of her, Susan, and our little sister, Jill, folk dancing with school friends at the Grafton Jacaranda Festival in the fifties. 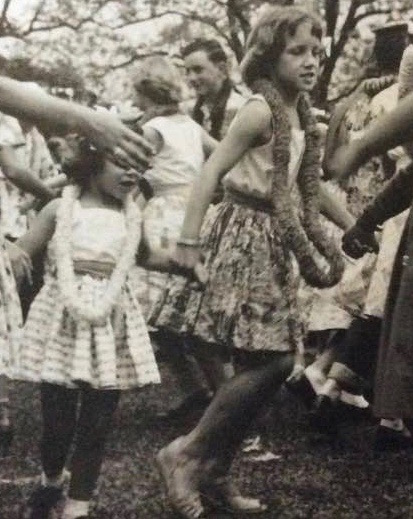 This annual spring-time celebration begins at the end of October and lasts until the first week in November. It has gone on since nineteen thirty-four, and was the first such folk festival in the country.

The Grafton Jacaranda Festival  is in full swing in my hometown as I write this post. It is a spring celebration that is held every year during the first week in November. At this time, the jacaranda trees are in full bloom.

Some childhood memories are golden. Or, in this case, mauve, lilac, purple, and, as Dad once said, “heliotrope”. It’s hard to pin down the actual colour of the flowers that bloom on the jacaranda trees, and form carpets of blossoms on the surface of the roads and avenues. Sometimes they seem lighter hued, mauve in my memory, at other times, darkly purple.

Local businesses decorated “floats” that were driven through the city streets, in a parade viewed by crowds of spectators. 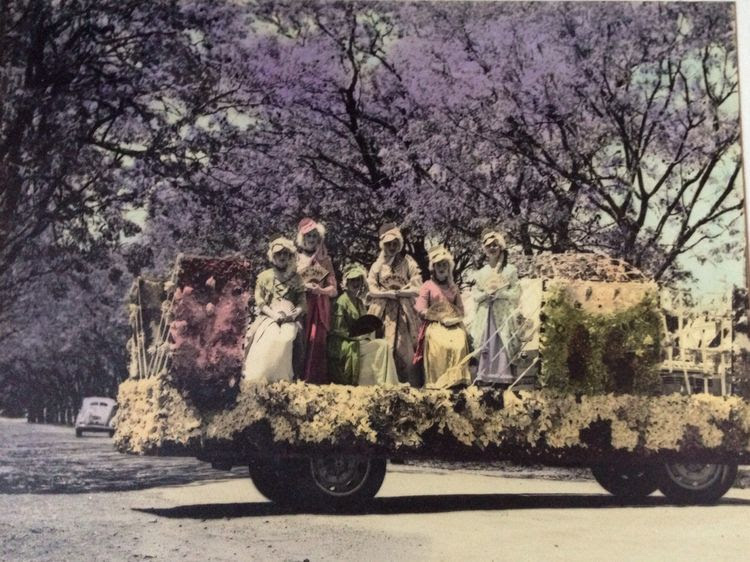 The chosen “Jacaranda Queen” rode in one vehicle and waved to the crowds. My ex-schoolmate friend was chosen one year. 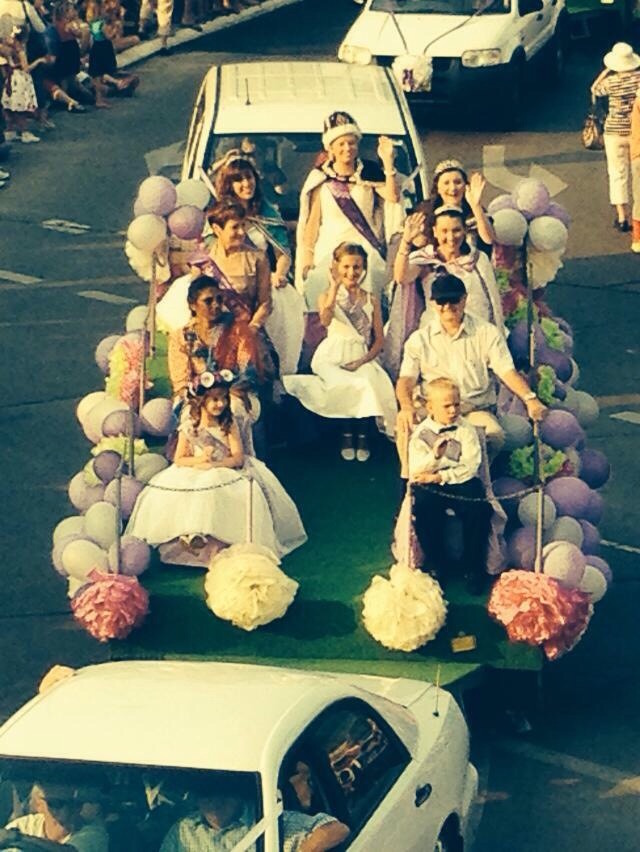 At night, decorated vessel floats were steered along the Clarence River, watched by crowds of spectators lining the waterfront. One of these  floats would carry the Jacaranda Queen, who was selected each year by a special board to give speeches and represent the whole occasion. 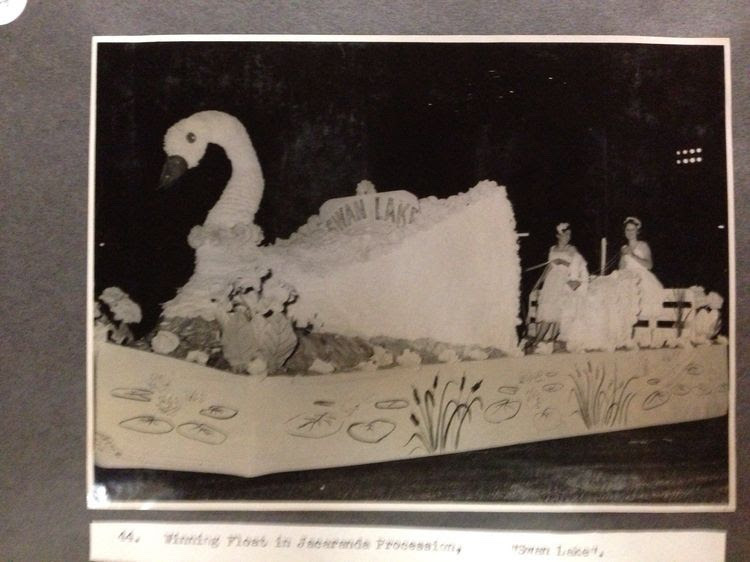 Young girls in the fifties and sixties wore leis made out of crepe paper at jacaranda time. Mum always ran up a bright new skirt on her Singer sewing machine for me—and my sisters—to wear with a white blouse. 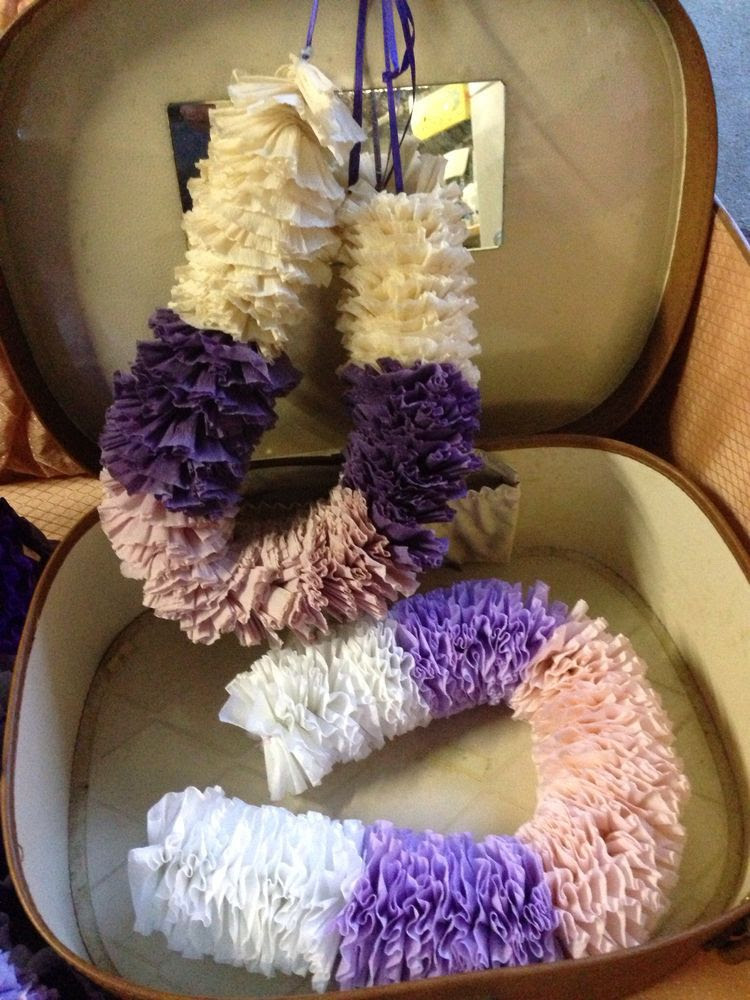 Many thanks for the historical Grafton Jacaranda Photos (above) which are from the Hackett family albums. 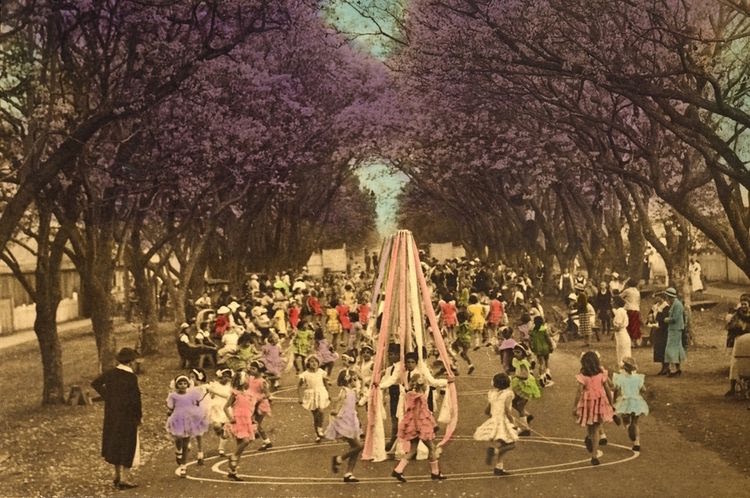 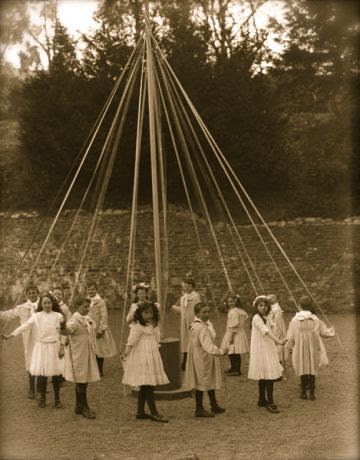 May Pole at the end of October! I once did some research on May Pole Dance etc in the UK, so this is interesting! Thank you for sharing your memory.
Good luck with your writings and see you some time later!

Thanks. Yes, we really are Down Under by comparison with the UK and Europe. Good luck with your ongoing blogging

Liked the photo of you and your bike. Grafton mauve was a magic moment when we drove through. Thanks for bringing back the memories.
Roger

Your sister Susan was in my year at Grafton HIgh but we only came into contact in 4th and 5th year as we did English together.
I went to South Grafton Infants – traveling by bus in from the border between Waterview and Seelands – 6 miles from the Post Office in South Grafton.
I was the youngest of 5 – my sister and brothers went to the Seelands school as there was no bus for them – it was only put on around 1952.
My eldest brother was Max ( killed car accident Whitton NSW – the HIgh School gave a guard of honour at his funeral South Grafton ST Matthews), the my brother Owen, my sister Lynette, brother Allan then me – Narelle Friar.
It was lovely to ‘happen’ upon this blog – I was looking for photos of Grafton and it was conceled under a photograph of jacarandas.
Thanks for the memories – the smells of the earth, the trees, the animals – never leave you once the Clarence is in your veins.
Thank you for blogging and writing.
Regards
Narelle Friar

Dear Narelle, Thank you for finding my blog and for commenting. Also, I see that you have actually subscribed. Great! I’m trying to slowly build up followers. Please keep in contact. I’m delighted to hear about your family, and to learn that you have bravely come through the hell of losing a sibling. My brother, Donny, also lost his life, late in life, due to an accident at the South Grafton Saleyards when he was eight years’ old. This had a profound effect on him, and he was never really well again. Can you send me some photos of you and/or your family, your house at Seeland,etc? I’ll tell my sister about this when I meet up with her for her 70th birthday celebrations soon. Where do you live now?