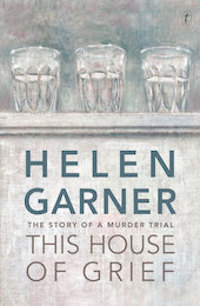 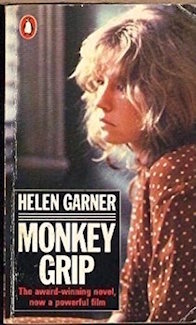 This novel was given to me as a present in the late seventies by a feminist girlfriend at the time.  The Melbourne setting was reminiscent of digs I’d shared with university students in Sydney, when I first came back from living in academic campuses in France.  The novel  Monkey Grip,  written in 1977, was a unique  commentary on Australian youth culture at the time. I empathised with the characters and the stories, while realising that my experiences in French campuses during the sixties had been very different.

Since then, she has written three important non-fiction books, including Joe Cinque’s Consolation (1994).

One of them, The First Stone (1995) , was part of the university curriculum when I studied Creative Writing at the University of Technology, Sydney in the nineties. It asked questions about sex and power inspired by a 1992 sexual harassment scandal at Ormond College, one of the residential colleges of the University of Melbourne. It has become a classic for studies in universities since its inception, especially because of its power to create controversy and polarise opinions among young and old.

Her latest book, This House of Grief (2014)  was based on a harrowing court case that focused on a man who drowned his three young sons by driving his car into a dam.

Many readers, including this reader, have enjoyed her personal, journal-style, almost confessional writings, in books, such as True Stories, Postcards from Surfers and The Feel of Steel. But even in her fictional novels and non-fiction books, the style is similar, and the narrator comes across as if she is speaking to you, sitting with you in the same room. I particularly enjoyed her The Children’s Bach and Monkey Grip.

Helen Garner is a courageous writer. I’d find the subjects that she chooses to research too harrowing, such as in This House of Grief about a father who causes the deaths of his three young sons, and Joe Cinque’s Consolation, about a similarly tragic true  story. For this reason, I say once again Hurrah Helen Garner!

Yes, she puts her whole self into it. And she’s a rebel, not sticking to any one genre. In her original incarnation as a high school teacher in the sixties and seventies, she finally got stood down (the sack!) for talking to young teenage kids, and answering their questions, about sex. She has written fiction, creative non-fiction, journalism, and journal-style writing. Like all good writers, she sees the complexities of life, more than one side, and tries to get to the bottom of things.

sounds fabulous! how is it going with your book?

I’ve sent the novel off to an editor for feedback, and I’m on the point, maybe, of self-publishing my memoir on Amazon. I’ll keep you posted.