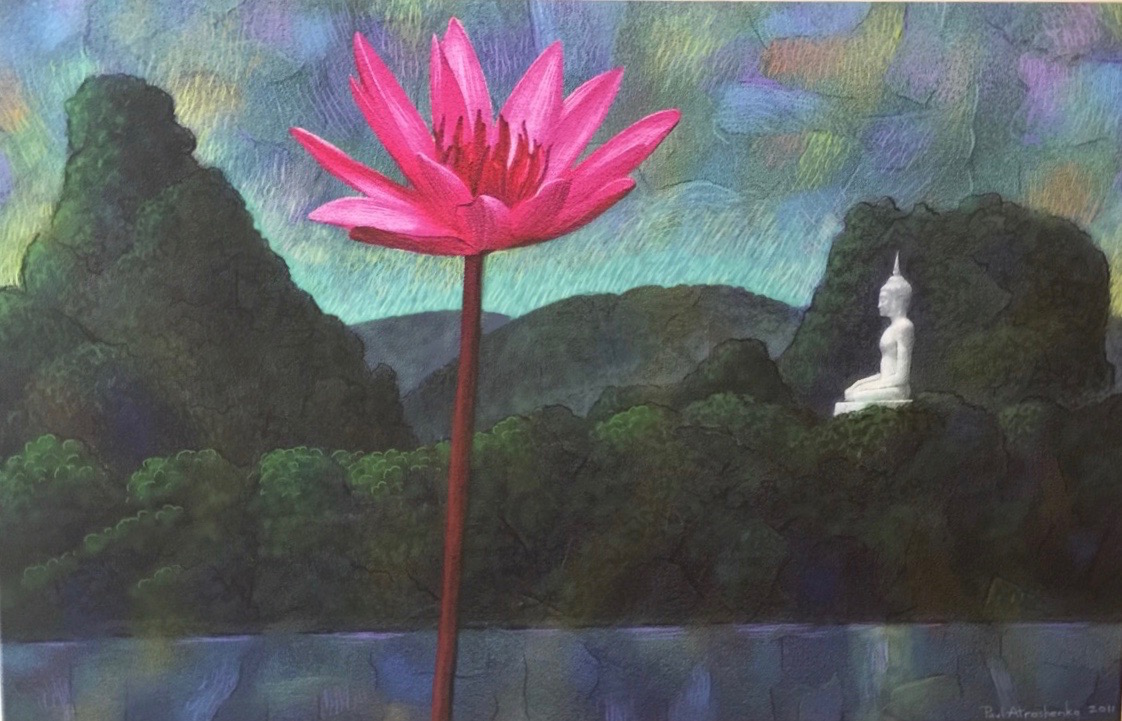 In 2008 I attended a Convention in Singapore for followers of the New Kadampa Tradition of Buddhism, introduced to the West by Geshe Kelsang Gyatso in 1977. He now resides at the mother centre in the UK. These festivals are annual events, and I was a novice, trying to understand in more depth what this form of Buddhism is all about. The master, in this case Geshe-la, teaches highest meditation practices and gives empowerments, which must be handed down in a “pure” state by the teachers of the tradition. The title of “Geshe” means “Spiritual Friend” and he is known as “Geshe-la” by his followers.

Monks and nuns of this tradition devote their whole lives to meditation and sacrifice to the spiritual needs of their followers.

ore than 3,000 people from all over the world attended the Singapore convention. What struck me was how many people are drawn to this tradition through a need for spirituality in our materialistic western societies.

“Buddha” means “The Awakened One,” one who has arisen from the sleep of ignorance into enlightenment. The original Buddha was Shakyamuni, born as a royal prince, Prince Siddhartha, in 624 BC in Lumbini, originally in northern India, but now part of Nepal. He devoted his life to the pursuit of enlightenment for the sake of all, and relinquished his attachments to worldly riches.

Kadampa Buddhism referred originally to a Mahayana Buddhist school founded by the great Indian Master Atisha (AD 982-1054). Followers of this tradition were known as “Old Kadampas” and those who came after Je Tsongkhapa in Tibet (AD 1357-1419) have been known as “New Kadampas.”

What drew me towards Buddhism, was the offer of a practical method for attaining inner peace, even within the walls of our urban jungles. I started off by attending Saturday morning “drop-in” sessions at Bondi Beach Pavilion, the seagulls, waves and murmurs from beach-goers a constant buzz in the background. I listened to the practical advice offered by the young monk and followed the simple but powerful meditation directions along with the rest of the class. It was good value for $14. My mood changed progressively over time from one of frustration at the obstacles life was throwing up, to one of peaceful acceptance that I could meet whatever came my way. The support of the group helped in an inexplicable way, especially for going deeply into that quiet centre within yourself during meditation.

I later on progressed to the more intensive Wednesday evening classes at the main centre (not quite a “temple” as yet) in a terrace house in Bondi Junction.

The main message that seemed to help me and others is the very simple one, that life presumes problems, i.e. suffering is an inevitable part of being alive, and it is your attitude towards this that can make the difference. In addition we were opened up to the possibility that anger may not be the most helpful way of responding to difficult situations and to solving problems The other important message was to do with unhealthy attachment that holds many people in its thrall, and if challenged appropriately, may be the key to freedom from suffering. But the overriding principle lessons that came out of these sessions, was that of the importance of developing a good heart and the realisation that everything depends upon the mind.

The Venerable Geshe Kelsang Gyatso resides at the Manjushri Centre near the Lakes District in the UK and has taught and written books on Buddhism there for the last 30 years. There are now over a thousand centres throughout the world that follow the Kadampa tradition.

There are four main schools of Tibetan Buddhism: Nyingmapa (The Ancient Way); Kagyupa (The Oral Lineage); Sakyapa (The scholarly tradition); and Gelugpa (Way of Virtue). The latter had its birth in the 14th and 15th centuries and is linked to a Kadampa tradition and to Je Tsongkhapa. The four main traditions of Tibetan Buddhism have always lived with conflicts and contradictions, but what connects them despite their differences are certain spiritual aspects, some of which have been mentioned above. 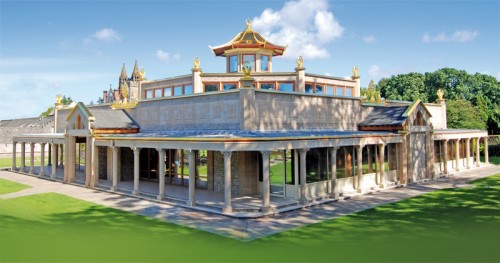 The Manjushri Temple in England

What drove me to leave the group, and to carry on spiritual development alone, using the valuable meditation skills I’d learnt, was what turns me away from all organised religious groups: too much dogma wrapped up in fear, and the lack of an open forum.

However, I’ll  be forever grateful for the spiritual lessons I learnt, the meditation techniques, and the beautiful Liberating Prayer  that has to be sung to music— or listened to—to appreciate it properly.

This experience of learning about and practising Buddhism, made me realise that all religions have a spiritual base that is similar. All religions, be it Christianity or an Eastern form of religion, have their strengths and weaknesses, being human representations on earth of the divine.

Thank you Anne. I am attempting to incorporate the principles of Buddhism in my life. Only scratching the surface but I feel the effects already. Best, Maureen

A great idea. It really helped me. Let’s talk about it some time. It’s amazing, I still meditate. Best wishes.