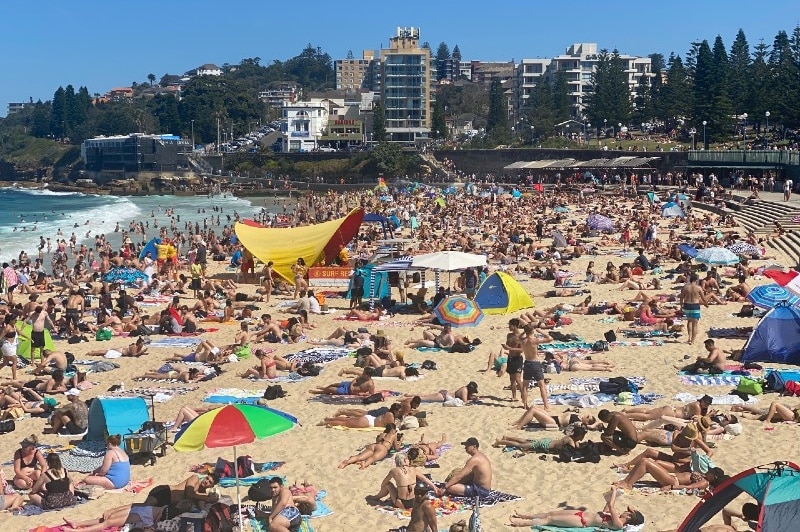 I live at Coogee, close to the beach in a unit with my husband of 45 years. Coogee Beach is located on Sydney’s famous Coastal Walkway, which stretches from Bondi Beach to Maroubra Beach. The name Coogee is taken from a local Aboriginal word “koojah” which means “smelly place”. Mountains of seaweed collect on the beach at times due to winds and tide influences. But daily beach cleaning by Randwick City Council ensures that the sands are pristine and soft white, stretching along the 200 metre shoreline of the bay. The beach is partly protected by a rocky outcrop called Wedding Cake Island, and shark nets have been laid nearby, so that few sharks have been seen in the area for many years. There are four seawater pools along the foreshore from north to south.

Australians are great sun and sea worshippers, and many are lucky enough to live near the ocean. They are also reputed to be great readers of books. This post combines those two pastime passions within it.

It was the first hot Sunday and a crowd had spread out across the sands at Coogee Beach. I walked along the foreshore and saw that many people of all ages were reading books, paperbacks stuck in the sand, or held high by sunworshippers on their backs on towels; some were reading on electronic devices, but I had to eschew those for this post. I saw that most sunbathers had settled down at a safe distance from one another, that is, despite the look of the crowd in the header photo, taken from high up.

I’ve been in the habit of noticing, for some time, what people read on the beach at Coogee. Always from a safe distance, and with my mask on, during these anxious times. This day, as I looked from the shoreline with my 20:20 vision (since cataract surgery), I noted down the titles on my iphone; sometimes I slipped cautiously between bodies, to view a look up closer. Never talking, always at a safe distance…

Here are some of the books being read this day…

A recent survey of Australian reading habits provides insights into contemporary preferences, behaviours and attitudes of Australians towards books and reading. The Australia Council has partnered with Macquarie University on this third and final stage of their three-year research project titled ‘The Australian Book Industry: Authors, Publishers and Readers in a Time of Change’.

The Pandemic Down Under