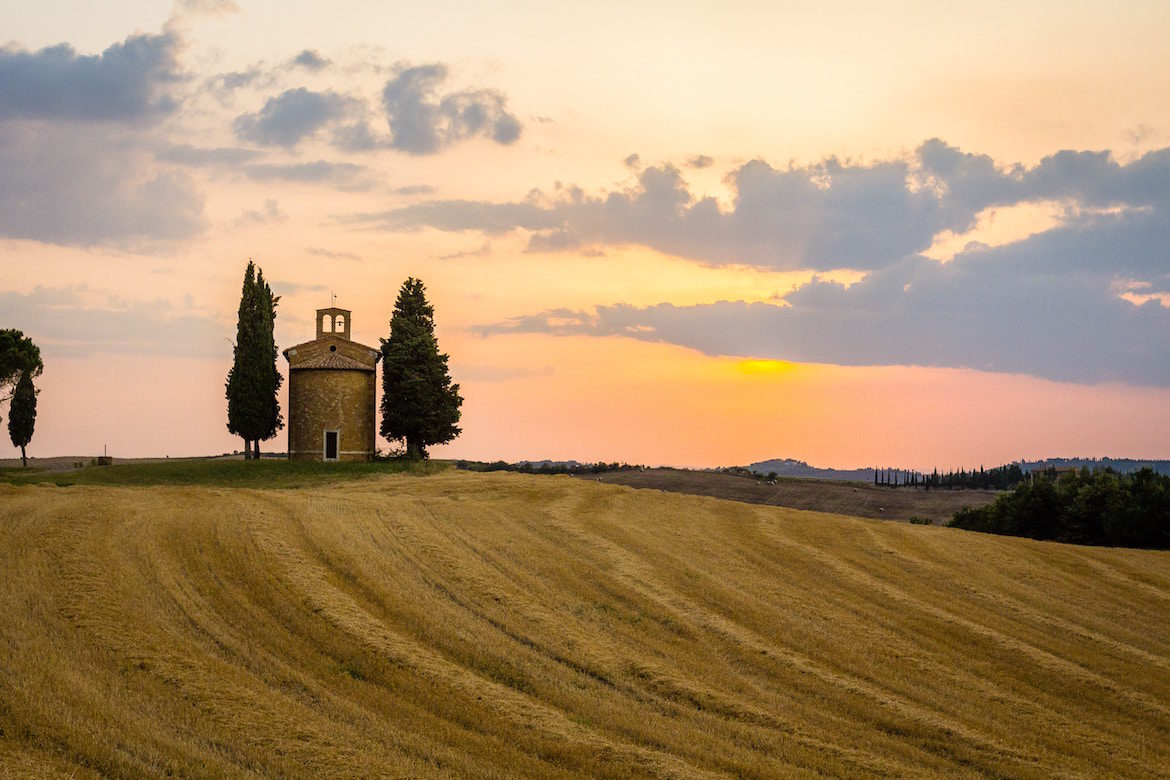 Driving on the autostrada is a relief after Rome. Watch on the right, my partner says repeatedly, having been traumatised when the mirror on our rented manual Fiat Punta was flattened against a truck in Rome’s crowded streets. I’m the driver, having learnt to conduire à la droite in France, as a student there. Mark will prepare lots of fresh dishes, based on heavenly tomatoes, plucked straight from the fields. When we get to the outskirts of Siena, we ask for directions to our destination.

A rusty sign on a hedge, after winding roads and an unsealed gravelly stretch, marks the hamlet. First settled during the Etruscan era. Dogs, cats, a few children and a smiling woman with false teeth greet us. Several small cars are parked on the narrow gravel street, mediaeval buildings, the lot set in field and forest—oak, laurel, elms, conifers, and the ever-present cypress pines.

Our Australian contact, Sarah, has a red nose from working in the vegetable garden. After thirty years in Italy, her English is measured, as if under the influence of the syllable-timed rhythm of Italian. She shows us into a stone building through a doorway level with the street. A pitch-black hall shared with the downstairs neighbours envelops us. Sarah’s apartment is at the top of a dark flight of stone stairs. The door opens onto a large light-filled room, sparsely furnished in a rustic style. High ceilings. Large windows. Views of green forests, glimpsed past azure skies, and pink and red geraniums in window boxes.

Our bed-sitter is in an adjoining barn-like structure downstairs. Minimally renovated inside, it comprises five square metres of space and a small shower/toilet room. Like all buildings in the village, the exterior remains untouched. It was once a stonemason’s workshop. 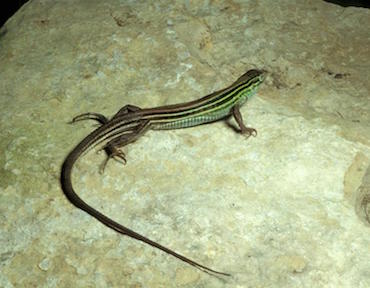 I’m washing my face in the bathroom. A small green spotted lizard falls into the wash basin. Sarah picks up a scorpion from the floor and squashes it. I find one or two others nearby during the next few days. These are some of the minute horrors of living in the first world.

Our host shows us over her vegetable garden and surrounding areas. Then we go with her to the dam on a farmer’s property nearby, bumping along an unsealed road, the trees covered in dust that clings like snow to the branches. We have a swim in the murky green waters, surrounded by new-growth forest. It’s quiet, peaceful and reminds me of Lock Ness or the Lago di Como. I wonder about what is beneath the surface; Sarah says frogs and fish. I ask her if the farmer minds it being used for swimming. She says no. Ownership seems more blurred here than in Australia.

Fausto with the lean and hungry look, Sarah’s neighbour, is an ex-hunter turned municipal employee in road maintenance. He is married to an archaeologist, who works in a nearby museum; she is always escaping in a small orange van, leaving him to look after the house and the kids. I hear him shouting at them to shut up when I’m passing the doorway. They have an ex-hunting dog called Bella, who is blind and deaf, but enjoys just lazing around on the doorstep, a far cry from living in a cage, as she once did.

The couple on the other side of us have built an underground tunnel to join up the kitchen with the rest of their house. The mediaeval stone facades must not be touched.

There is also the Communist, whom I see every day in the fields, wearing a wide-brimmed leather hat, tending the vegetables and feeding the rooster that crows every morning and wakes us up.

On the way to the town of Siena, we pass by the burnt oranges, dark greens, lighter greens, straw-colours, browns, clays and off-whites of the landscape. A bright yellow-and-green field of sunflowers, their funny faces turned towards the sun, flashes into view with the shock of a Van Gogh painting. We find a wonderful Sicilian seafood restaurant in a hotel and have a hearty lunch: swordfish and a mixed seafood platter. I use my dictionary to interpret the menu.

Outside, we walk along cobbled streets to explore the quiet village. Time seems to hover in the stark midday sun. We hear faint sounds of life, coming from inside stone houses. Everyone has gone to sleep, Rip Van Winkle style. As if for a hundred years.

Today is the day of Il Palio—the horse race—in Siena. The most dangerous one in the world according to a recent post.

The City Square and the Duomo, Siena

We get there after lunch and park near the Duomo Gates outside the city. Entering at the Snail Contrada, we see red-and-yellow flags with snail emblems on them. It is a totally walled-in medieval city of sixty thousand inhabitants, living in Contradi or city wards. These are composed of streets owned by families, each one represented by the symbol of an animal:  a snail, a tortoise, an eagle, or a unicorn. Each Contrada has its own flag, shield and colours. Crime is almost unheard of inside the city. In earlier times, an offender who disgraced the Contrada, was stripped and thrown outside the city walls.

There is great excitement. The bi-annual horse race throws Contradas into competition with each other, and it’s about to start. 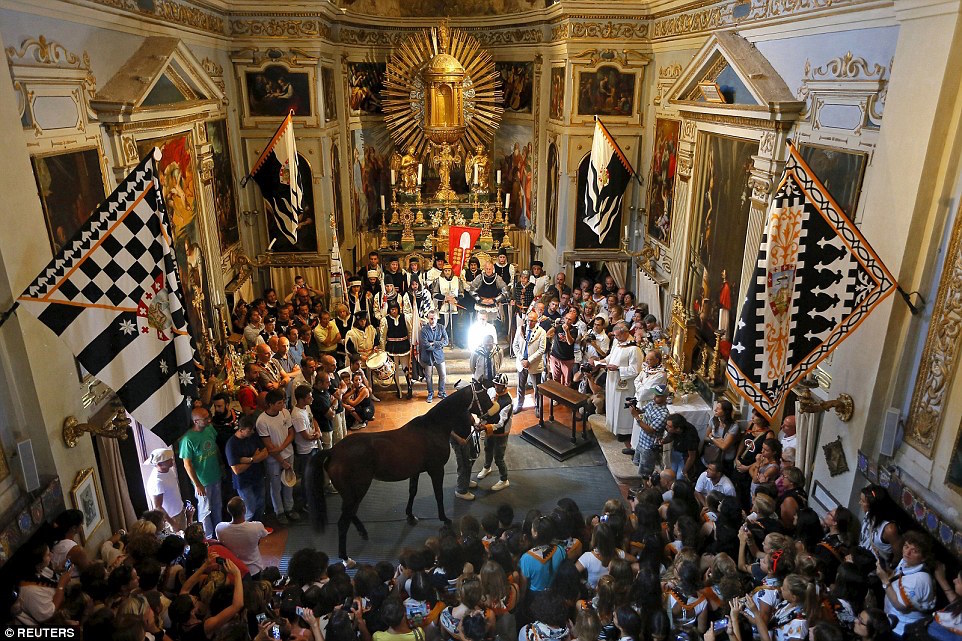 Everyone inside the Snail Contrada expects the Snail horse to win the race. It is a real honour for a Contrada to win, and a special disgrace if you lose to your neighbours. The girls are marching around in coloured scarves singing the Palio song in unison at the tops of their voices. The Contrada youth are having lunch in outdoor ristorantes. We walk through the Tortoise, the Eagle, and the Shell Contradas, past the black-and-white striped tower of the Duomo, to reach the Palio piazza. All the Contradas have their colours hanging out from windows and everyone is in high spirits.

One hundred thousand people stand in the centre of this small piazza, encircled by the treacherous-looking racetrack. Shoulder-to-shoulder in the sun, sipping from bottles of water filled from taps found there, the crowd is eager to get a glimpse of the race. Other viewers are perched on verandas or roofs high up above the piazza. Well-heeled citizens look down from the windows of restaurants and offices surrounding the ring. The race will last about ninety seconds 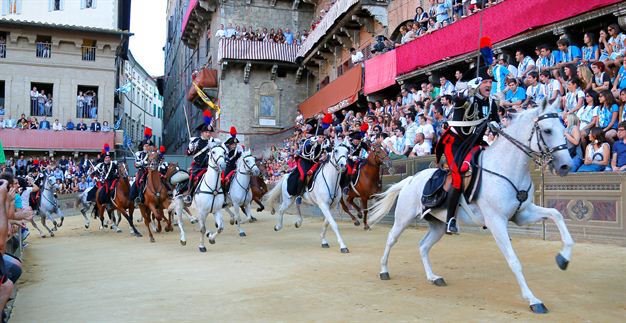 Velvet hangings on stone facades from the twelfth and thirteenth centuries catch our attention.

Horses covered in bright red velvet coats reaching right down to the ground are led into the ring. They are followed by Contradi marchers in medieval garb swinging bright flags on sticks that they throw high up into the air, causing them to cross in mid-air before catching them again. Finally a cart pulled by four large oxen arrives carrying dignitaries dressed in medieval garb and the “palio,” a tall decorative stick that will be given to the winning Contrada.

There is a strange moment when quiet descends over the crowd as the placements are called out. The last rider stays back from the pack, waiting for the right moment to enter the fray and set the race in motion. Riders jostle to position themselves according to their allotted numbers. More like a circus act rather than an official event. 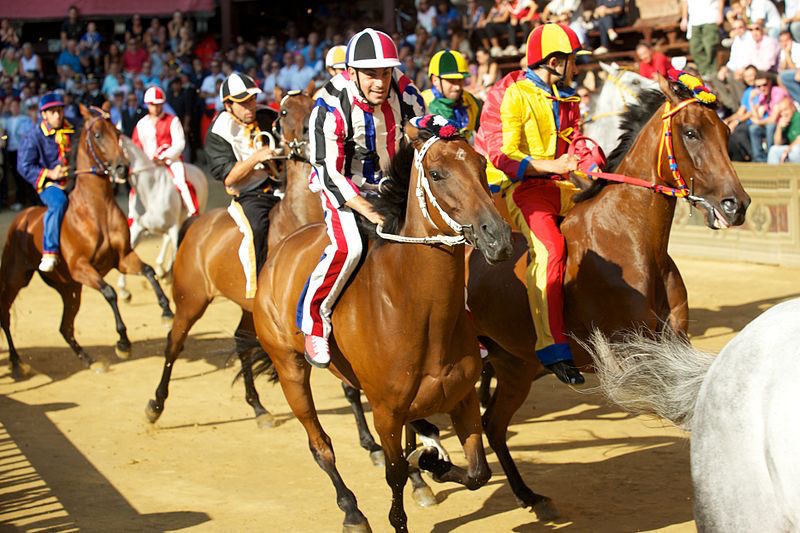 Happening without warning, it’s a weird start to the race.  One horse with a blue-garbed rider is way out in front for two circuits. Suddenly the jockey pulls out of the race with a pained expression on his face. Another rider falls off on a bend.  His horse keeps running and it’s a beat-up then between two horses—the riderless Forest Contrada horse and the Giraffe one.   The riderless horse wins the race by a nose!

A general feeling of disappointment wafts across the air of the Snail Contrada after the race. In one street, youngish-looking men and older women are actually crying, heads in hands, while others are gossiping in groups. We see the Snail horse being brought up to the podium area of the Contrada. There will be celebration regardless, with sumptuous feasting, helping to assuage the grief of losing.

When we return to Tonni that night, Sarah explains to us the bits about The Palio that we didn’t understand. She serves us a feast of aged Tuscan beef and fresh vegetables from the garden, followed by Parmesan cheese that has been ripened for eight years.

So many surprising and paradoxical images and memories. They will stay with us forever, eclipsing in some ways the glories of Rome.

The night before we leave the area and say goodbye to our newfound friends in Tonni, we watch from our window, entranced, as glow worms glitter in the dark fields beyond. 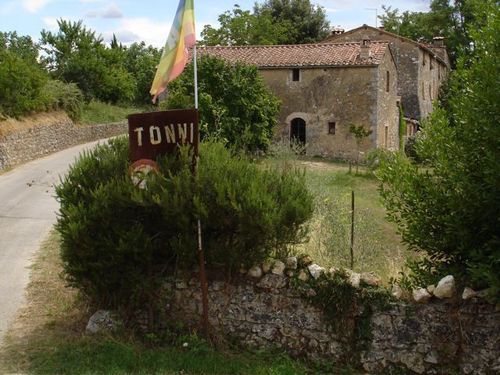 Beautiful. I felt as though I was there. Wonderful photographs.

Thanks, Maureen.
It’s like something out of a dream, looking back on it today. I think that fantasy-like aspect comes across.
Glad you liked it.
Anne