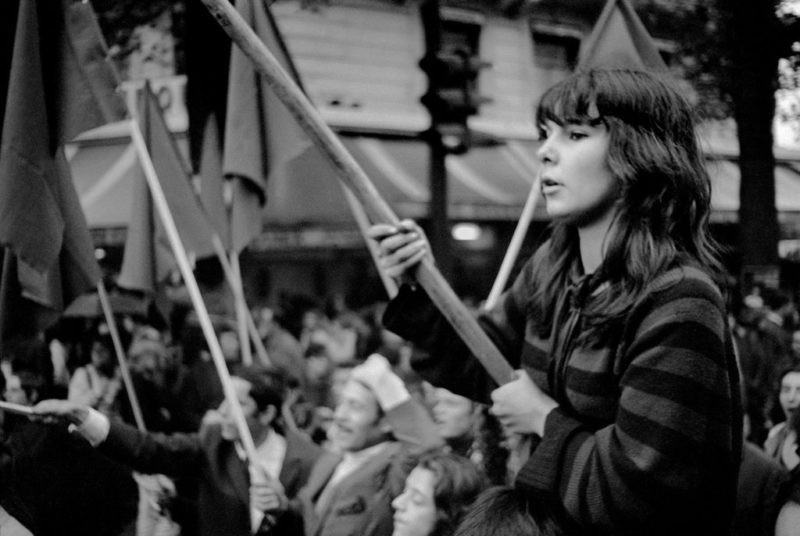 It was a steep climb up a creaking staircase to the small flat overlooking a courtyard at the back of the building.

Once in the flat, she was a child released in a magic castle, running to each window and feasting on the Mary Poppins-like scene of rooftop spires and toy street-scapes at all cardinal points. Inside was a foreign country in miniature: its smells and furnishings, reflected an exotic old-world charm.

Alain had told her to use what she wanted from the kitchen. The cans of food in the pantry, all were new to her: chestnut jam a thick sweet strange-tasting substance and something called cassoulet in a tin and brands that she had never heard of nor seen in the shops back home. She was elated and at the same time disoriented. She wanted to clean her teeth, but discovered to her horror that the white tubed stuff was shaving cream

She couldn’t wait to get downstairs once again and wander around the maze of streets and districts, as she’d once done around the farm as a small child. On the southern side of the street she came upon the immense Luxembourg Gardens, walked through them still marvelling at the feeling of being in a dream from which she might awake at any moment. Further on she came to the Boulevard Saint Michel. Crowds of fine-featured French walked or sat in bars and in cafés; African and Arabic looking student types mingled with them laughing and talking gaily. Moroccan restaurants were everywhere.

Feeling safe in the bustle of the Latin Quarter, she sat in a Moroccan restaurant and ordered a couscous dish. Sumptuous, unlike anything she’d ever tasted before. Feeling liberated, she washed it down with cheap red wine. Looking out at the sophisticated and fashionably dressed women, she wondered at their slight frames and neat coiffures, and compared them with her ample curves and Rapunzel-like unschooled locks.

Following the rim of the Jardin back the way she’d come, she was able to make her way home to the flat without too much trouble.

For many days she wandered, love-struck by beauty and by difference, around the streets with their ancient, graceful buildings and perfectly manicured gardens in the classic style. As if in a dream she floated up and down the escaliers, past the concierge, and out into the streets, then back inside.

After two weeks, she moved into a dark flat with an elderly crone who kept cats upon the dinner table. Hannah bathed only once a week next-door; they were friends of Alain, who’d found the lodgings for her. The water in the bathtub was black from grime that settled on her as she combed the streets in step with adventure. Boredom was a thing of the past.

To improve her French she recounted over and over the story of her life, where she came from, where she had lived, and of whom her family consisted.  They always asked what her father did. How to translate ‘grazier’? Fermier?  Propriétaire de ranche?

Through a chance encounter, she found a cheap room that had once been servants’ quarters at the back of a doctor’s gracious residence, where she lived for a while and sensed the ghosts from a thousand years around her as she lay in the dark before sleep overtook her each night. There was a shared ‘water cabinet’ that she had to squat over as she’d been used to do when nature called while mustering cattle in the bush. As her savings began to dwindle, she grew tense with anxiety and found a part-time job cleaning rooms in a hotel not far from her lodgings. She wondered about the lives of the single men whose rooms she cleaned, but whom she never saw, and whose musk-like scents she inhaled.

One night she felt a dark presence invading her tiny room at the top of the fire escape stairs. It was time once again to move on. She needed a flat mate.

Walking back from Irma La Douce early one evening, as twilight caressed her in its dreamlike tones, she found herself taking on the character from the film. Swinging her hips, she became Irma as she swayed along the boulevard, green stockings highlighting shapely legs underneath a tight-fitting woollen dress. Then she was being followed, and felt a rush of fear mixed with elation that made her quicken her pace.

He started to quicken his pace too. Part of her liked the fact of being desired by a romantic Frenchman. The man would catch up with her and know which was her street. She thought of allowing him to follow her upstairs to her tiny room. To let him kiss her on the lips. He would undress her there and initiate her into the ways of French lovers, as she had read about in books while at university. Another part of her recoiled with fear and horror at the idea. She imagined him saying: “Vous-êtes comme la vedette américaine, Shirley Maclaine.” I am like her, she thought. And she would enter into conversation with him. It was her Anglo-Saxon body, she knew, which attracted the attention. Contrasting with the delicate, petite lines of the French women all around her.

At that very moment fate intervened and took the decision out of her hands. There was a fracas going on up ahead on the boulevard Saint Michel that would throw her into history, as if she had been Fabrice caught up in The Battle of Waterloo like Stendhal’s character in the novel she had studied while at university downunder.

She soon found herself in the midst of fresh-faced students sitting cross-legged on the pavement facing rigid rows of baton-carrying police.

Tear gas was thick in the air and some of the students were crying uncontrollably. There was talk of the military being brought in by De Gaulle and blood in the streets.

The police started to move towards the Sorbonne, which was on the opposite side of the street. Pictures of Marx, Lenin, and Mao decorated the old pillars surrounding the front square. Red and black flags hung alongside the Vietcong flag. Trotsky, Castro and Che Guevara pictures were plastered on walls alongside slogans such as ‘Everything is Possible’ and ‘It is Forbidden to Forbid.’

Hannah was afraid that she might be arrested and deported. She slunk back towards the apartment blocks and stood inside a doorway. Residents were hanging out of windows. They showered debris over the police and water over the students to minimise the effect of the chlorine gas grenades.

A young man with scraggy red hair jumped up on a wall in front of the Sorbonne and cried out to the students to carry on.

“Qui est-ce?” she asked a young woman who was standing smoking Gitanes next to her.

“On l’appelle Danny le Rouge; c’est l’un des leaders.” She understood immediately that he was the leader of the student rebellion. And this was how she met Ellie, who was handing out lemon-soaked handkerchiefs smeared with bicarbonate of soda for around the eyes, as well as leaflets on how to protect oneself against tear gas. Ellie was the antithesis of every stereotype Hannah had ever had of a German: short with thick dark hair, cerulean blue eyes and pure white skin. She was a student at the Ecole des Beaux Arts and worked part-time as an artist’s model.

At that moment the police moved into the Sorbonne and arrested the red-haired man. Students started pulling up paving stones from the streets and hurling them at the police. Then others joined in. The police were flailing their batons at the demonstrators. Hannah saw students fall to the ground. She saw police clubbing students on the pavement,  blood streaming from their faces. But the students also fought back. They kicked gas grenades at the police, who protected their faces from stones with masks that looked like fencing ones.

“What we are afraid of is that le Géneral de Gaulle will set the army on to us,” whispered Ellie who was pale yet determined.

The students had made bonfires like the cracker night ones back home, only from cars and anything they could lay their hands on. They set them alight. She started to join in; she was already in too deep. She felt terror and elation mixing in her chest in equal measure. She knew, too, that she’d met a sort of soul mate in Ellie. If not that, at least a flat mate. “Meet me tomorrow in the Père Lachaise Cemetery,” the girl said in between her revolutionary duties. “We will talk then.” And it felt to Hannah like she’d come home.

But for now … it was the night of the barricades. 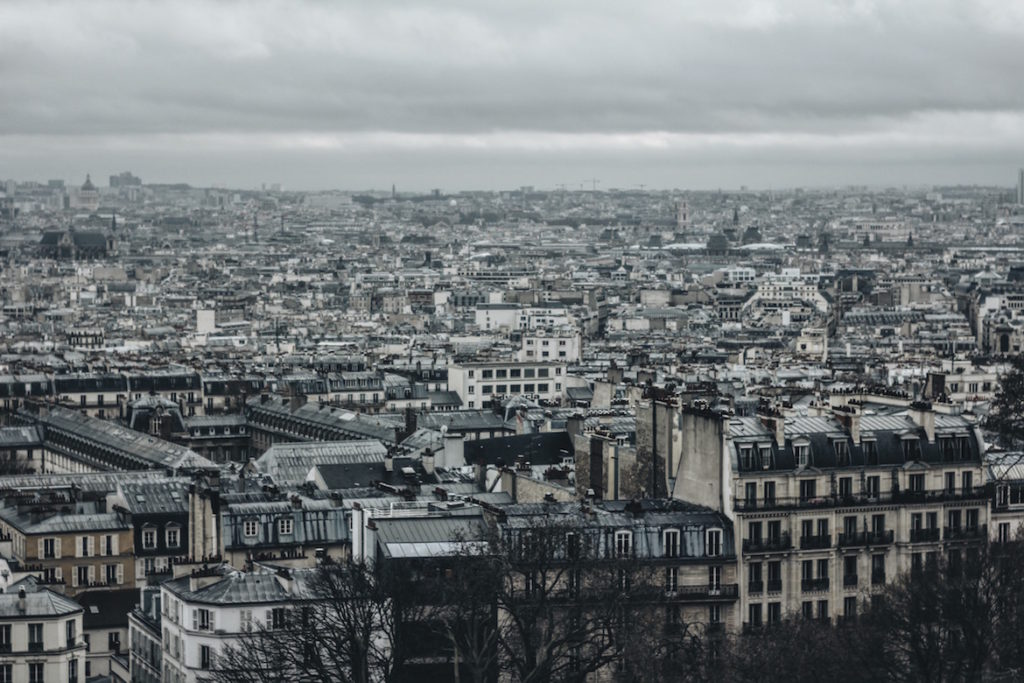 The Night of the Barricades was last modified: April 9th, 2019 by Anne Skyvington
a positive culture shock storyhistorical story set in parisParis student rebellion of 1968the passion of youthful adventurethemes of dark and light in paris
1 comment
0
Facebook Twitter Google + Pinterest

I can’t believe you were there in Paris in 1968!! What an exciting autobiographical story. The street scenes reminded me of Bertolucci’s Dreamers. The film isn’t great but it provides a window onto these turbulent times. And of course, we are waiting for the next installment!
Dagmar