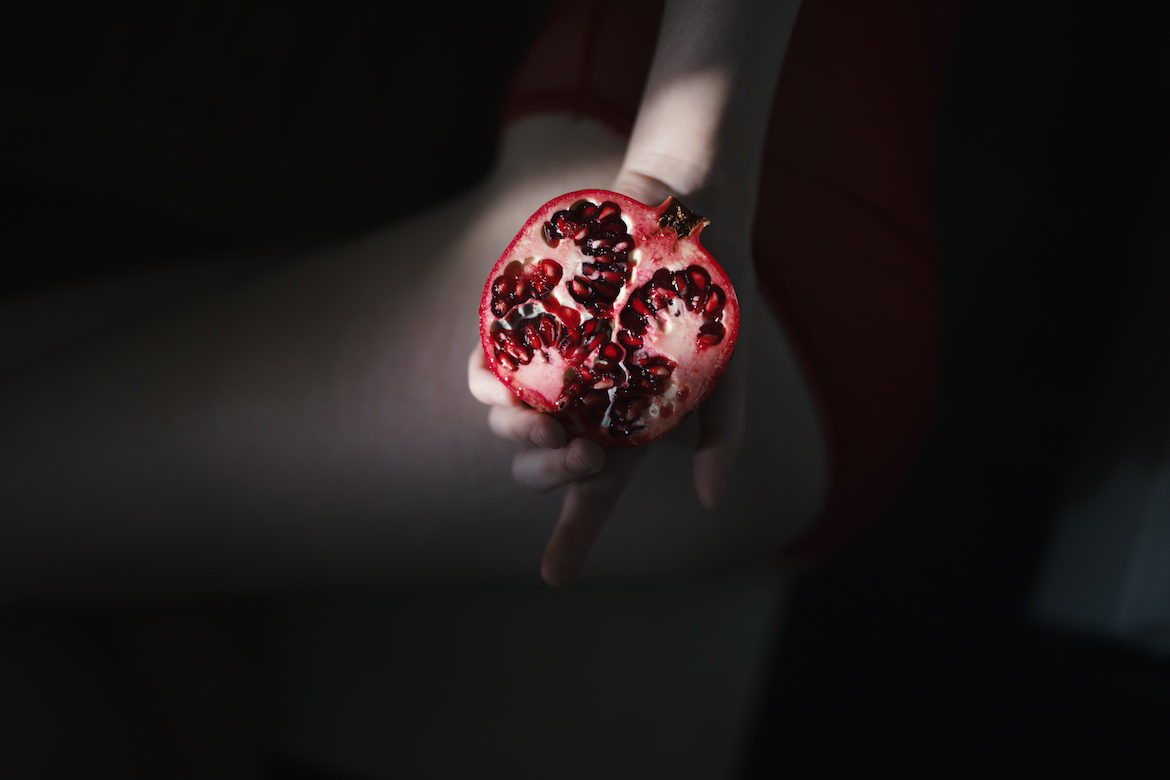 The Myth Linked to the Earth Today

We earthlings are being jolted by human damage to our natural home. Climate Change is causing huge shock waves to register throughout the globe. Fierce fires have broken out this summer here, and recently in California and even in Athens, Greece. The temperature of the earth is climbing steadily towards a tipping point. Damaging floods have been increasing in intensity in China, Europe, India and in South East Asia, as the level of the sea continues to rise.

With bushfires ravaging our country at the moment, this ‘myth‘ about transformation may be more than ever relevant to us today in Australia.  The feeling that many of us are experiencing is of hopelessness, depression and ‘falling into the abyss’.  Like a descent into Hades. Others are asking what it will take for Climate Change deniers to wake up to the fact that something urgent needs to be done.

Like the cycle of the seasons, like death following on after birth, we must also try to keep in mind that ‘this too will pass’. And then, following on from recovery—that may take us months, if not years—let’s be motivated to work courageously together. Let’s work together to make changes, either via the body politic, or as individuals—in whatever capacity we can—so as to ensure that such terrible devastation may not happen ever again in this country in the near future.

Let’s take heart from the firefighters and from the amazing actions of volunteers; and from the outpourings of empathy, of money and of supplies from ordinary citizens here.

Let’s determine to fight for change that needs to occur.

Australians must become ‘climate change warriors’, world leaders in environmental matters, such as replacing the use of coal with energy renewables. For the environment of this country is fragile, something the indigenous owners understood eons ago. We are now playing the role of ‘the canary in the mine’ for the rest of the world to see. Let’s hear and heed the call to action.

We Australians are grieving for our country and for the people and animals who have lost everything, even their lives.

Can this myth assist us in understanding a little better, and in coming to terms with what is happening here? It is the deeper meanings of this myth that resonate with me, and which reflect the experiences of all who must suffer from pain and loss. And isn’t that all of us?

The Meaning of the Myth

Kristina Dryza is recognised as one of the world’s top female futurists, that is, scientists and social scientists whose specialty is futurology or the attempt to systematically explore predictions and possibilities about the future and how they can emerge from the present. She is also an archetypal consultant and published author.  In defining a myth, she referred to  James Hillman,  Joseph Campbell and Carl Jung, experts on mythology.  For the purposes of Kristina’s workshop, myths represent the human search for what is true, significant, and meaningful from our cultural past.

Her talk on Persephone and Demeter at the Sydney Jung Society  opened me up to some of the more meaningful concepts to do with this archetypal pair. Together, they represent the idea and experience of despair (Demeter) and shock (Persephone), when something untoward happens to you, for example a betrayal, a sickness, or a broken leg. It often comes like a jolt out of the blue. The extreme nature of the bushfires has taken many of us by surprise.

It’s our journey of pain, and no one else can take it for us. No one can understand what it’s like for us while in the underworld of despair and fear. And the hardest thing at the time is to tell ourselves that this too shall pass.

I have for a long while been drawn to the archetype of Persephone. Personal attraction to an archetype is like an urgent calling, something that really speaks to you and urges you to investigate it further. Only recently, have I realised that Persephone must be, necessarily and forever, coupled with the other archetype of Demeter. This, too, makes sense to me from a personal perspective.

What are the transformative aspects of this myth?

The overarching symbol of the underworld is ‘the unknown’. Because it is hidden from view and unseen, it is a realm to be feared. However, one can learn to love the underworld, too, or at least to withstand it. And by so doing, one can gain in fortitude and in endurance.

The Pairing of Persephone and Demeter

The relationship between Persephone and Demeter is basic to the whole myth. Persephone is the golden, naiive child of her mother, Demeter.  She lives and plays in the apparent safety of the fields and sunlight provided her by Demeter, Queen of the horizontal world above ground.

As goddess of grains and harvest, Demeter lives on the surface of things, unaware of the dark lurking out of sight; she is therefore lacking wholeness. Kristina reminded us of Jung’s words, that you can either have goodness or wholeness, not both together. In other words, experiencing the dark is part of becoming whole. Demeter imagines that her daughter is safe from harm, happily picking flowers in the sunshine with friends and animals above ground.

Out of a crack in the earth, four black horses appear. Driving a chariot, Hades kidnaps Persephone and takes her against her will, down into the subterranean depths of the underworld. The earth closes up again, and all that is left above ground is the flowers that Persephone was collecting for her mother. She is to be married to Death, the consort of the King of the underworld. The black horses that draw Hades and the chariot represent intelligence, but, in this case, dying consciousness.

Demeter, whose domain is ‘cornucopian’ consciousness, is bereft and enraged over her daughter’s abduction. On a deeper level, however, the rape of Persephone represents for Demeter, a jolting of consciousness. This enables her to access, eventually, deeper levels of herself in order to grow. 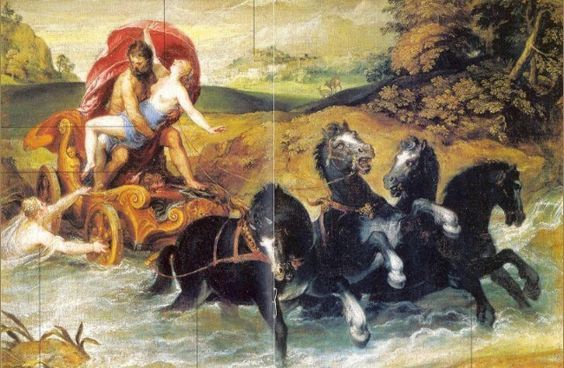 The Rape of Persephone
C. Schwartz 1573

Kristina notes that destruction is often the right hand of creation and creativity.

Persephone represents transformation itself. She can and must go beyond her mother. In order to fulfill her destiny, she must undergo a rebirth into a new narrative, a new consciousness. The underworld is the interior world: that of the unconscious, the archetypes, the collective unconscious, and the unknown and unseen worlds. She now has a chance to become more complete, to find deeper levels of herself through interior work. Persephone also represents victim energy and the wounded healer.

Her journey toward wholeness helps others to heal.

Demetrian consciousness is depth potentiality: the gift of the shadow. She must experience famine, as well as fertility. And when her daughter is taken away, her grief produces that famine on the earthly horizontal level. Persephone, however, is beginning to thaw towards her abductor, and to enjoy her role as Queen of the Underworld. There is much work to be done at the vertical subterranean level. However, her mother’s despair—causing the continuing famine above—convinces Hades that he must relinquish his consort for six months of each year, during which time, she can return to her mother’s embrace, and enjoy the sunshine and fertility above.

The Myth Linked to the Seasons on Earth 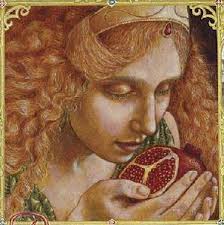 Persephone and the Pomegranate

However, Persephone cannot return to the upper world without bringing some of the underworld with her. After all, she is the very bridge into the underworld. When she agrees to eat six pomegranate seeds offered to her by Hades, the deal is done. She must spend half of the year above ground, and the other half in the underworld.

Listen to Kristina’s TED talk on Youtube at https://www.youtube.com/watch?v=2o4PYNroZBY

The Myth of Persephone and Demeter was last modified: January 16th, 2020 by Anne Skyvington
a definition of mythlinks to climate changethe myth of persephone linked to the seasonsthe overarching idea of the underworldtransformative aspects of the myth of persephonewhat does demeter represent?
1 comment
0
Facebook Twitter Google + Pinterest

[…] have always felt empathy with the myth of Persephone, the maiden forced to live for a period in the underworld, separated from her mother, Demeter. […]