Here’s a story from my Teachers’ College friend, Ian Wells. It’s great for me to re-live that all-important primary school teaching experience through his words. It’s the kids’ future that is at stake, and they do it well in small schools. 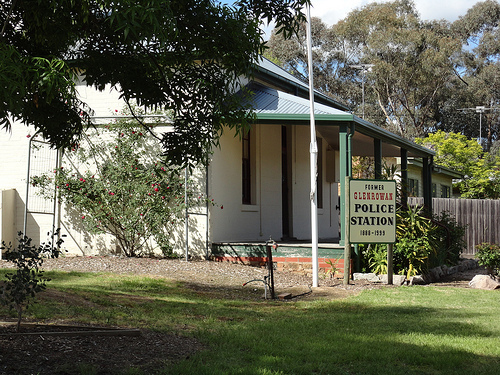 One Police School visit in the mid-seventies was particularly memorable, but it wasn’t so much due to the officers, as it was to the cute kids in my classes. Small schools were nearly all one-teacher schools and mostly on bush roads, often along meandering rough gravel tracks. My school at Coolongolook was a favoured small school for the Police Liaison group to visit, as it was on the Pacific Highway and was easily accessible. There were only two classes, so there was no need to split the ‘task force’ for the visit. The two constables could take a class each and the sergeant could supervise rather than take a class.

The sergeant and I became quite friendly over time, as I invited him to ‘supervise’ (socialise) from the nearby school residence over coffee, munchies and a natter, while the constables each ran their race with the kids. Talk about six degrees of separation; the sergeant and I discovered some mutual friends and acquaintances and also some similar mutual interests; a love of motorbikes not the least of these. In other words, ‘big kids’ stuff! It was quite a pleasant arrangement, which continued year after year for the best part of a decade.

Just before each visit I would remind the kids of their obligations towards visitors, the need to be polite, to listen, not to fidget and not to ask questions—certainly never about the officers’ weapons—until invited and warn them that if I found any of them touching the guns or wearing handcuffs at the end of the visit I would be very annoyed. They were good kids and I had no doubts the day would go well both for them and for the police. I also organised a child from the primary group and another from the infants group to formally thank the officers for their instruction at the end of the visit. This practice of thanking visitors was a normal thing for us and the task was shared around, not always just the duty of a ‘captain’.

The car arrived and two male officers got out and walked to the school building. I met them on the verandah, said my good mornings and asked if there were just the two of them that day.

A reply from the poker-faced sergeant informed me, “Constable Powell is making herself presentable.”

The constable, smiling broadly, like a cheeky kid, added “She’s trowelling on more spakfilla and touching up her lipstick. She’ll be here presently.” This earned a stern sideways glare from the sergeant.

When she arrived shortly after, I saw that Constable Powell was an attractive young lady, but one who obviously knew it. She was also quite heavily made-up.

The rest of the visit went pretty well as per script. After I introduced the constables to the children in their classrooms the sergeant and I went for a coffee, cake and a yarn, while the kids were entertained in class with stories and instructions about stranger danger, road safety, bike safety and being good citizens. At the same time, the young constables tried to fulfill their duty as positive roles models for the children.

The only time a gun-related question was asked was by a Year Three boy, who showed his birds each year at the Nabiac Show: “Can you come and shoot the rotten fox that is after my prize chickens?” He was quite disappointed when the constable said he couldn’t, as he wasn’t allowed to.

There was nobody wearing handcuffs when I checked, either.

The whole school population gathered on the concrete assembly area in front of the verandah for a final farewell. The nominated Year Five child thanked the male constable for his visit and his talk, then presented him with a hand-drawn certificate of thanks. Each child in the class had made a certificate and voted for the one to be presented. Everybody clapped and the constable gave his thanks in response.

”I want to say thank you to Comfortable Cow for coming today …” she began. The quickly but barely muffled guffaws from the other two police officers drowned and then cut short the rest of the speech. A shocked lady constable glared at her companions, while slowly going red under all the spakfilla, as they, in turn, made valiant attempts to gain control of themselves.

What a situation. I didn’t know whether to laugh, cry or feel embarrassed, while the Year Two moppet just stood in confusion, wondering whether or not to say the rest of her speech. I assured her all was fine and to go on. She completed her speech, then shyly handed over the certificate and the police left.

Coolongolook Public School is a small school with a student population of 40. It is situated in a picturesque valley located between Bulahdelah and Nabiac. The school has a very interesting and intriguing history, it is 133 years old!