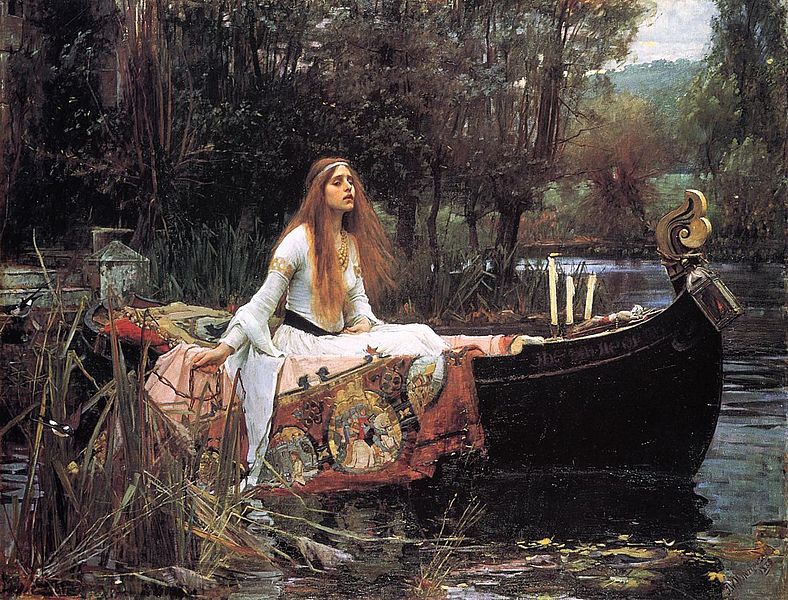 Tirra Lirra By The River by Jessica Anderson

Where does the title of this book come from?

In 1978, Jessica Anderson won the the Miles Franklin Literary Award for her fourth novel, Tirra Lirra by the River, published by Macmillan. It has rarely been out of print since.

Yet many readers are unaware of the origin of the title. It comes from a romantic poem, The Lady of Shalott, by Alfred Tennyson, published in 1842; it is his most tragic one.

His broad clear brow in sunlight glowed;
On burnished hooves his war-horse trode;
From underneath his helmet flowed
His coal-black curls as on he rode,
As he rode down to Camelot.
From the bank and from the river
He flashed into the crystal mirror,
“Tirra lirra,” by the river
Sang Sir Lancelot.

The story of the poem: (Thanks to Jane Gleeson-white for her excellent summary of the poem’s plot in her 2010 Overland article “Farewell Jessica Anderson—1916-2010—and Thanks”)

“The title Tirra Lirra by the River comes from one of Tennyson’s most popular and tragic poems, ‘The Lady of Shalott’. It is about a woman, the Lady of Shalott, who is confined in a tower on an island in a river that flows to Camelot. She is cursed to sit alone and to see the bustling world of Camelot below only through its reflection in her mirror. And so she spends her time sitting by her window, watching the reflected world in her mirror, recording it with her needle and thread in tapestry”.

“One day the Lady of Shalott sees in her mirror a dark-haired man riding by. It is Sir Lancelot: ‘“Tirra lirra,” by the river / Sang Sir Lancelot.’ She rushes to her window and looks straight at the world below, the unreflected world, as she is forbidden to do. The curse is triggered, her life must end. The Lady of Shalott goes down to the river where she finds a boat. After writing ‘The Lady of Shalott’ on its prow she lies down and, singing, floats toward Camelot. And she dies with the unfinished song on her lips.”

To plot or not to plot…

Jessica Anderson, the author of one of my favourite books of all time, died on 9th July, 2010 at ninety-three years of age. Her funeral was held at the South Chapel in Malabar, and many literary notables were present including David Malouf, who gave the tribute. She went quietly, her passing being largely unnoticed, which was typical of the woman and of her life. She won the Miles Franklin Award for this novel, written at a time when there was a dearth of fiction by women writers in Australia. She wrote several more novels, one of which, The Impersonaters also won awards. Later on, she made a conscious decision that she would write no more fiction.

The book is written in the first person from the viewpoint of an elderly woman, and describes the character’s life in Queensland, then in London,  and on board the ship that took her there, as well as events unfolding when she returned to Australia. It is written with such spirit, that readers have assumed that the elderly woman was Jessica Anderson, who was, however, in her forties when she wrote the book.

Tirra Lirra has never been made into a film, partly because much of it is in flash-back mode, which means that the forward movement necessary for action and good cinematography is missing. As someone once said: “Nothing happens in the novel.” In an Australian Book Review article, Kerryn Goldsworthy writes:

“It is a book about the inner life: about memory, imagination, and the still, silent workings of one person’s mind. The novel’s external time frame is not much more than a month or so, while Nora is almost immobilised by illness. But the story is essentially one long act of remembering, covering almost seventy years, punctuated by short forays into the present day when things happen to jog her memory further. There is very little action, except within the frame of her memories. And yet this book has been widely read, widely praised and widely loved by two or three generations of Australians”. https://www.australianbookreview.com.au/reading-australia/jessica-anderson/tirra-lirra-by-the-river-by-jessica-anderson

The men in my life seem to have no trouble in imagining storylines. I have received help from my brother, whose storyline ideas for me were imaginative and full of surprises. And he reiterated what I already knew myself, that I had to write fiction, not memoir, to escape from the bind of “facts” or “truth”. Whether writing in the first or third person, I can become “me but not me” or try to escape totally from the “I” of the narrator. Fiction is more liberating.

This leads me to postulate the possibility that plotting is a “male skill”, whereas female writers often tend to write more in segments and rearrange these into a workable plot afterwards. Aristotle believed that plot/story were more important than characterisation. Women friends and writers often show a preference for characterisation. I realise that this is akin to saying that men are more rational and women are more emotional: a terrible stereotype!

However, traditional “maculine virtues”, such as heroism, strength and war, can easily be seen as linked to plot lines; and strengths, such as being in touch with deep feelings correlate well with femaleness. Thus: characterisation. That is not to say that men and women fall strictly into either category. For, as a devoted Jungian, I know that each one of us is composed of both female and male qualities in differing degrees: the animus/anima archetype.

Favourite writers who may fit the stereotype

A favourite male writer is the American, Paul Auster, who manages to write interesting stories with male characters. He is that rare breed of writer who is also drawn to experimenting with form in his novels. His memoir-based novel The Invention of Solitude throws some light on his obsession with male characters.  At the beginning of many of his novels, the characters are often dying, old, blind, or linked to death and sickness. The plot is probably the dominant feature in the books that I have read: Man in the Dark, The Brooklyn Follies, The New York Trilogy, Invisible, Oracle Night, The Book of Illusions, and The Music of Chance.

His wife, Siri Hustvedt, probably also fits the stereotype, in that her novels stress the emotional through her characters. The plot lines are strong, but the focus is more on vibrant characters. Books of hers that I have read and loved: The Sorrows of an American, The Enchantment of Lily Dahl, and What I Loved.

The answer to plotting or writing in segments…

I have come to realise through my own writings that, no matter how or where you start off, you will almost certainly need to explore the opposite pole of the plot/character continuum, at some stage during the writing or re-writing of your novel or short story.