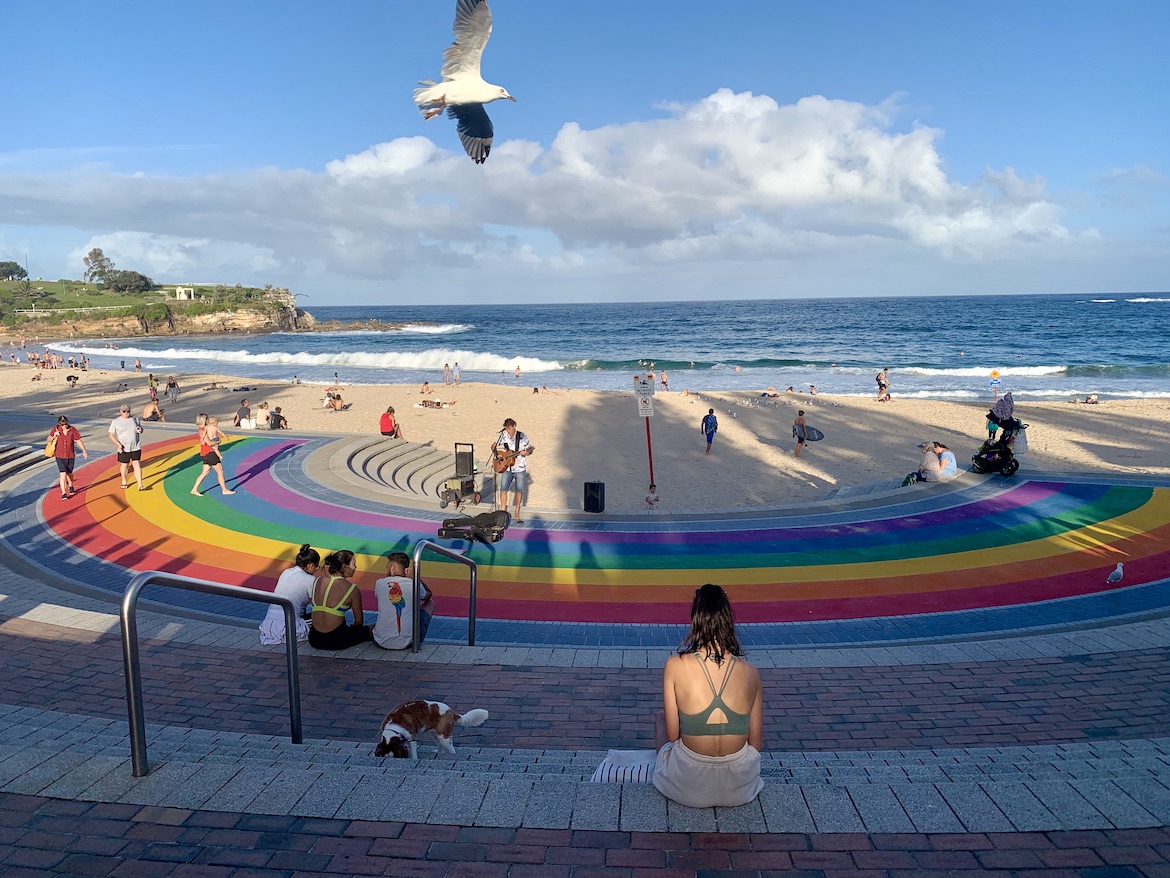 The Mardi Gras festival for the Gay and Lesbian community (LGBTQ) occurred as usual in March, within stricter guidelines than in the past, because of Covid. Randwick Council showed great initiative in promoting a rainbow coloured walkway on the steps at Coogee Beach. It brightens up the area and makes a statement about supporting stigmatised peoples, including gays, lesbians, trans and First Nation peoples.

The Eora people were a vast and complex Indigenous group of family and kin relations who occupied the area where I live today in Coogee. Their territory spread from the Georges River and Botany Bay in the south to present Sydney Harbour and north to Pittwater at the mouth of the Hawkesbury River, then west along the river to where Parramatta is today. It is said that the men swam on the north end of Coogee Beach and the women at the south side. If this is true, it is mirrored by certain practices today.

We have four rock or tidal pools in Coogee, Giles’s at the north end of the beach, and the Ross Jones Memorial Pool at the other end. A little further along the coast is the Women’s Pool, built in 1886.

Wylie’s Baths are on the other side across the rocks from the Women’s Pool.

The Coogee Ladies Pool used to be known as McIver’s, named for Rose McIver, from a swimming family who ran it until 1922. It is the only pool in Australia granted a 1995 exemption under the Anti-Discrimination Act of 1977 to operate for women and children only. It’s not the same as the exclusive Australian Club on Macquarie Street, the country’s oldest gentlemen’s establishment, which has drawn prime ministers and wealthy males to join its hallowed walls, and has still not as yet taken firm steps to invite women to become full paying members.

Like Balmain’s Dawn Fraser Baths, several long-time swimmers had been entrusted with keys to open up early for pre-dawn swims and to close up on sunset. Sometimes Muslim women in burkinis attended and topless women liked to sunbathe there, taking refuge from perverts, who were the reason for a fence being erected by the council.

Controversy erupted recently after the new operators of these ladies baths stated on their website: “Only transgender women who’ve undergone a gender reassignment surgery are allowed entry.” The mind boggles at the idea of the committee women enforcing this!

There had been an authoritarian atmosphere at the pool of late, with lots of restrictions and a loss of the welcoming, leisurely atmosphere and spirit the place once had. Long term members wanted to give the pool back to the community. It had lost its soul and ethos under this management.

After a well-attended public meeting, the managing committee was ousted by the council, with a new interim president and committee elected to run it. The club’s website now says the pool “provides a safe place for women of many ages, religions, and backgrounds” and “a sanctuary of healing, acceptance, and security”.

Nearby Wylie’s Baths is also a wonderful place, with some of the spirit of the old Coogee’s Ladies Baths. Mina Wylie (1891 – 1984) was one of Australia’s first two olympic swimmers, along with Fanny Durack. There’s a statue of Mina Wylie on the top level of Wylie’s baths.

Swimming Pools and Happenings in Coogee was last modified: May 20th, 2021 by Anne Skyvington
What are the 4 public baths in Coogee?Which one is for women only?Who was Mina Wylie?
0 comment
0
Facebook Twitter Google + Pinterest

From the Archives: Australian Story