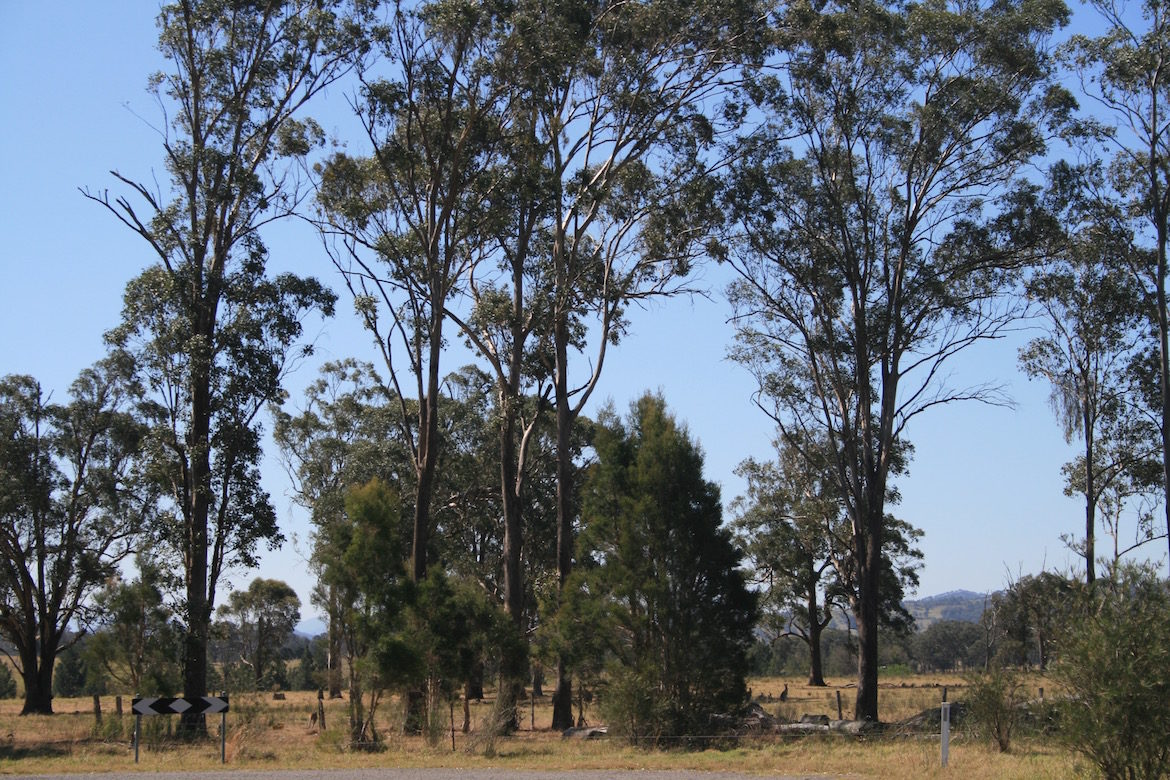 Vacy is in the Dungog Shire, not far from Paterson in the Lower Hunter Valley. It’s a 197 km drive north and then north-west from Sydney. Or you can catch the train to Maitland and be picked up by a family member from there.

Country living is much cheaper than renting or buying in the city. This young family spent their first few years renting in picturesque Paterson. Then they decided to build a house in nearby Vacy. How to do it? All you need is a two-acre block of land in the bush. And a kit home ready to install. In this case, one with many bedrooms. Five children and a dog came along as well. Help from a live-in granny was essential, also. She has her own unit at one end of the building. 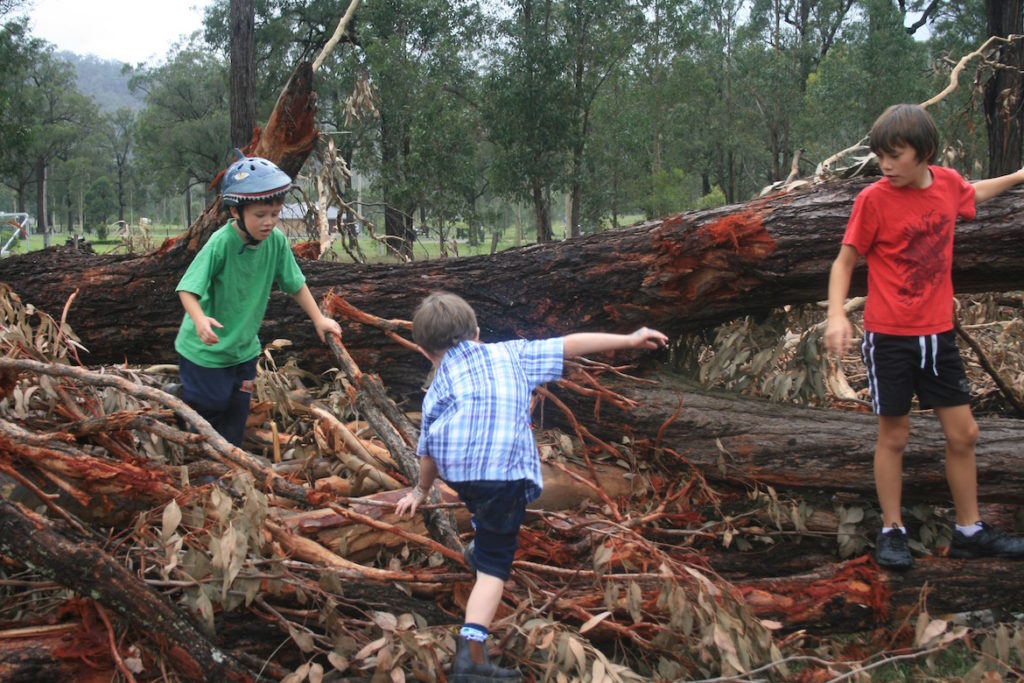 The Boys in their Element

We, the paternal grandparents, visit as often as we can. When we are there, it’s a pleasure to relate to the five children, four of them fostered from one indigenous family. I was brought up in the Clarence Valley, where my lifestyle was similar to that of these children. Some of my ancestors settled for several years in Paterson and Vacy in the nineteenth century. What a coincidence! This area is not very well known by the general population. 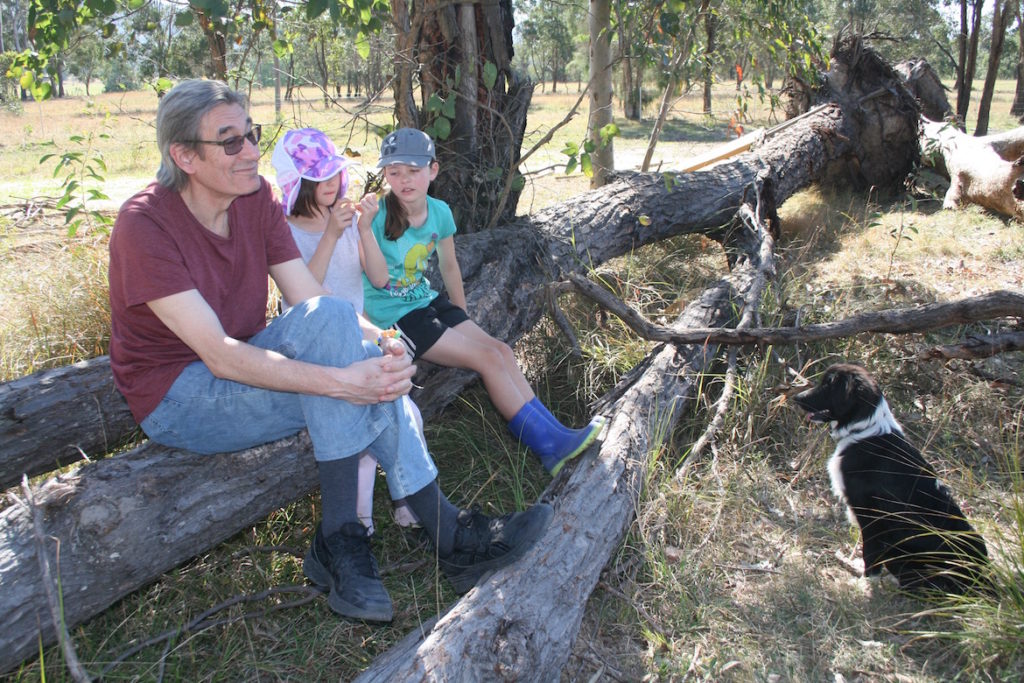 Grandad tries not to favour any one of the children, but the eldest boy and he are especially close. He spoils him with spending sprees on smart teenage fashion items, and gives him jackets from his own wardrobe. Bren likes sport, and is very good at basketball. 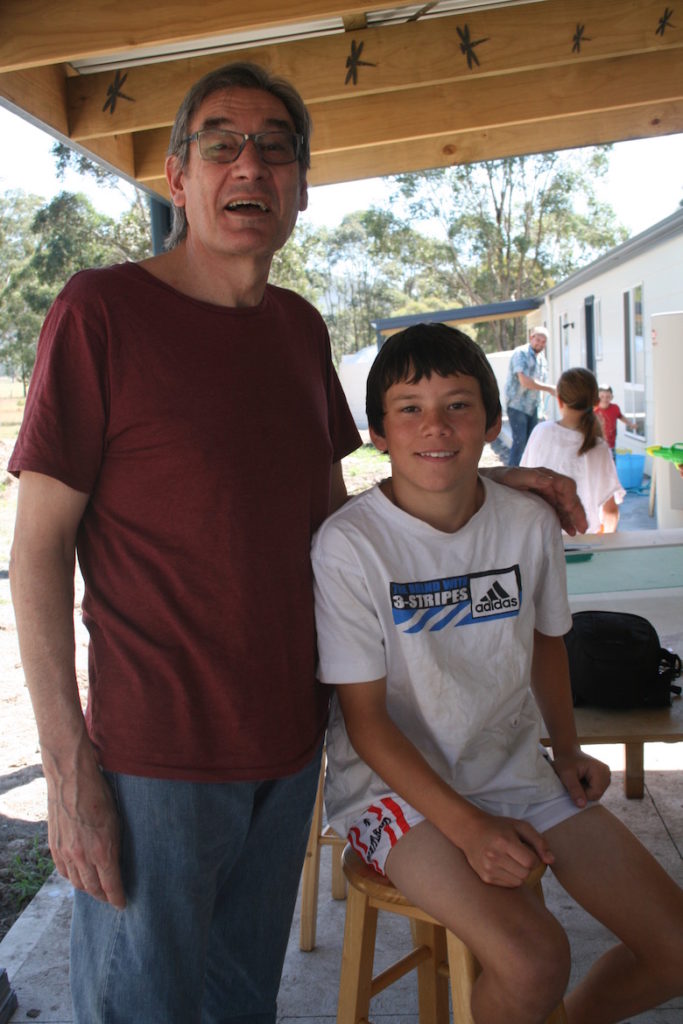 Grandad with the eldest

Father, Joel, works as a chef and is a wonderful home cook too. The whole family is vegetarian, or mainly so. Genevieve, the mother, is also a wonderful homemaker and pastry chef. Her love of studies, especially archaeology, is what brought them to the area in the first place. She took Joel along with her on a university tour in search of fossils. They fell in love with the area and the rest is history. 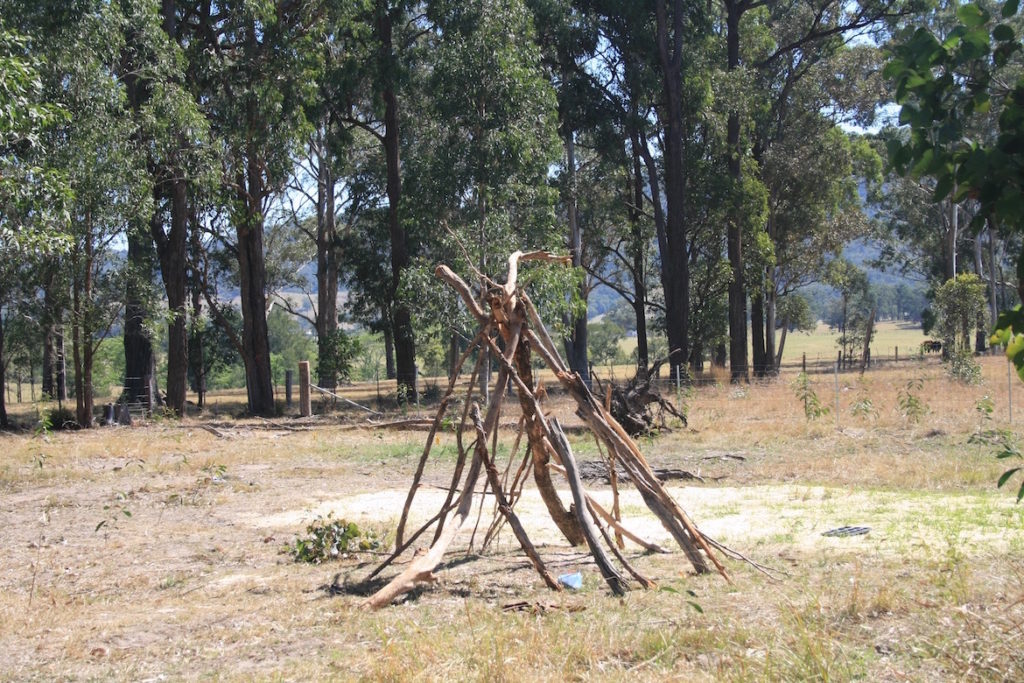 Tepees for the Kids

Joel has always been great with children, and with making things. He loves nothing better than entertaining his five kids with all sorts of games and building things. He makes tepees from left-over timber, constructed an outdoor library for Ari, who is the book worm in the family, and carved swords from timber for the boys. He keeps a large carpet snake in a cabinet in the lounge room. 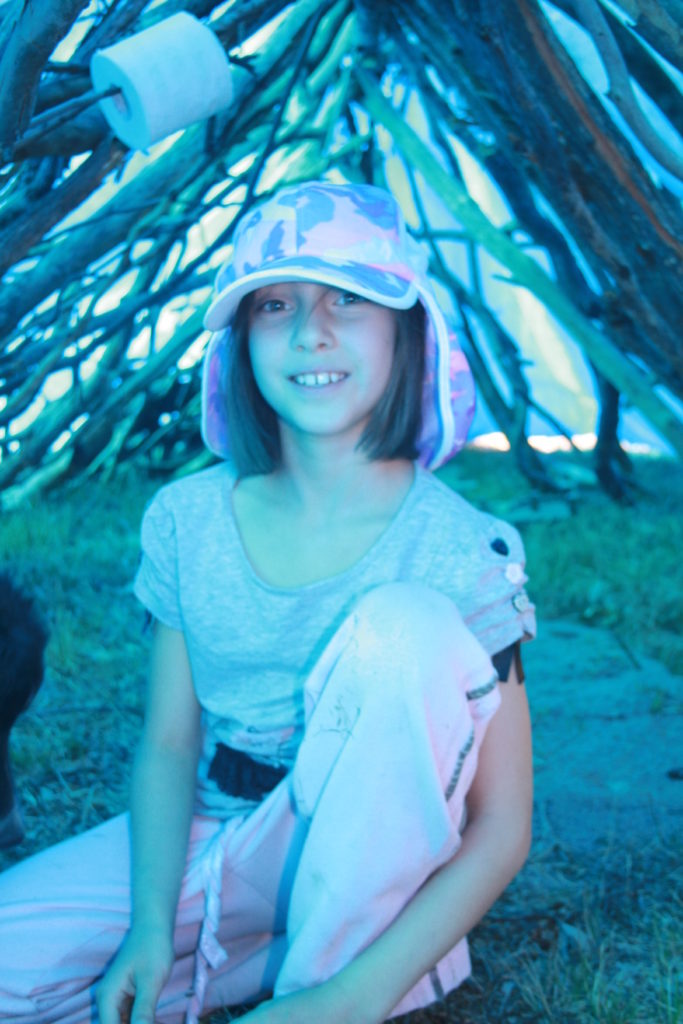 Ari in the Tepee

Ariadne was named after the Greek mythological maiden who enabled Theseus to come back from killing the Minotaur. The mythological hero found his way out of the labyrinth, by means of a long thread, which Ariadne had given him. This was one of the mother, Genevieve’s, favourite myths as a child. She is a graduate in Archaeology and has studied Aboriginal languages.

The Dixons (my newfound cousin’s ancestors) and the O’Keefes (my Irish ancestors) were cousins. They migrated from County Clare in Ireland in the mid-nineteenth century. Esther — a painter living in the Blue Mountains — found me through words in a book. My older brother William had, without knowing it, put us in contact through his family history book, A Little Bit of Irish. Many surprise coincidences connected us, Esther and me.

She is my age, intuitive, a creative soul, and in touch with nature. Esther also put me on to Songlines by Bruce Chatwin. He asserts that language started as song, and in the Aboriginal Dreamtime, the land was sung into existence: trees, rocks, paths and animals becoming one, along with the singers who sang them into being.

Paterson and Vacy in the Lower Hunter Valley are further points of connection between us. Her Dixon ancestors first settled there from 1861-1867 and established a home for their expanding family.  The small remote community of Vacy, is even less known than Paterson. And it is precisely where my son Joel settled with his wife and five children in 2005.

It’s also where four of the nine Dixon children were born between 1861 and 1867. “Vacy” was misspelt as “Nessif” in historical records of the time.

My cousin Esther writes: And what I’ve deduced is that, despite the rather primitive lifestyle of people in those times, they had a great sense of what is needed to live in a community.  Bit by bit they built up the facilities for a township, no matter how rough. Paterson was developed further than Vacy was, and remains a rather unique Historical Town. Vacy was not developed in the same way, but played an important part in the growth of the whole area.  And our ancestors contributed to that.  I wonder what would have happened if Michael Dixon had stayed there and not gone to Grafton, to be killed falling from his horse, leaving his wife and nine children,  behind.  And if Catherine Dixon had stayed too, and not had her daughter Alice (21) die of typhoid fever in Grafton, then die broken hearted herself.  What if …? 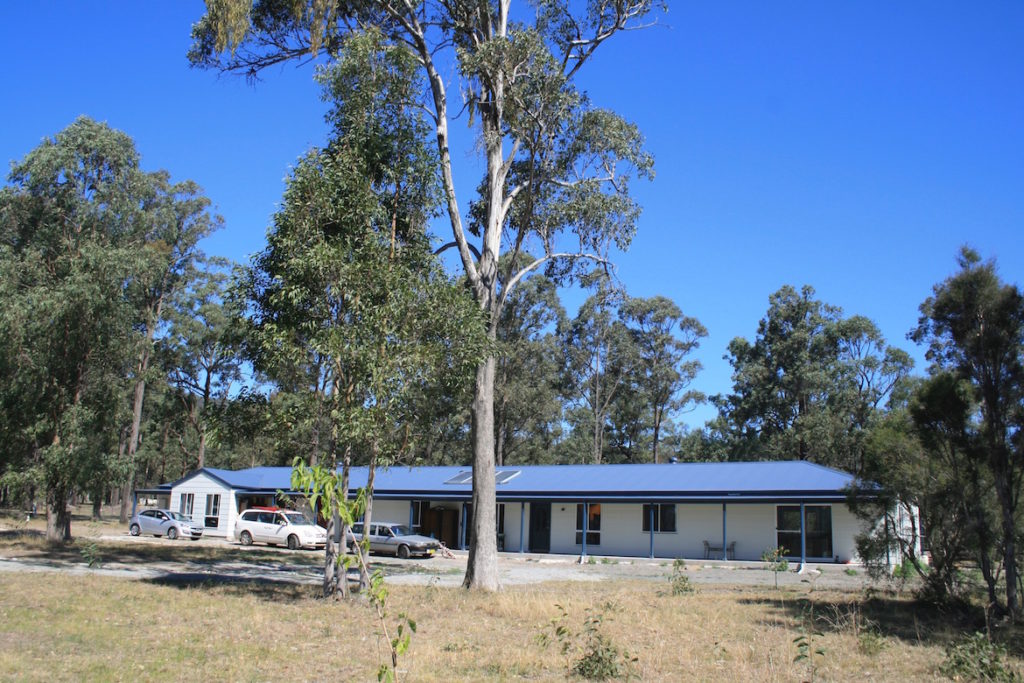 Many thanks to Esther and to William for their exhaustive genealogical research.

A Kit Home Goes Up in Vacy was last modified: October 14th, 2019 by Anne Skyvington
a kit home goes up on a 2 acre blockcountry living is cheaperDixon/O'keefe family historythe dungog shire in the lower hunter valleyvacy near paterson north of maitlandwhere is vacy?
0 comment
1
Facebook Twitter Google + Pinterest