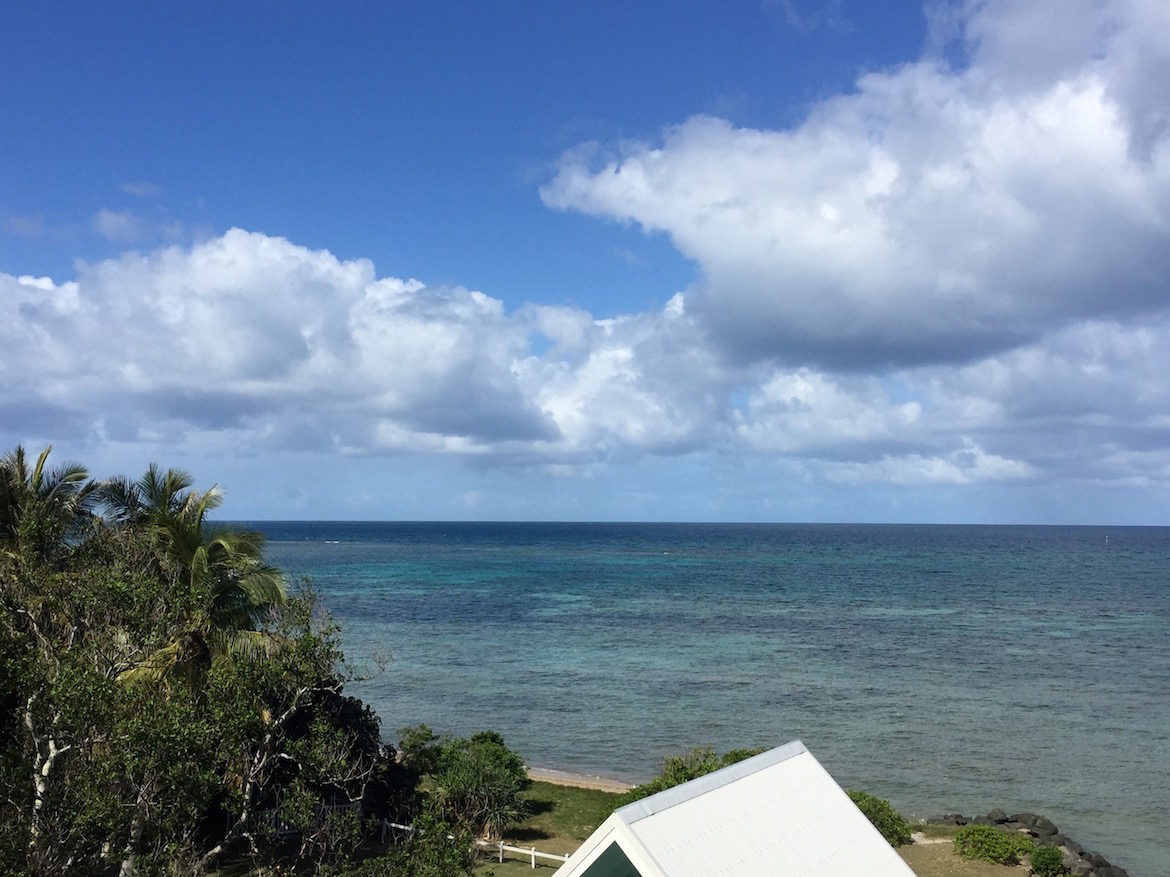 Cynthia Rowe was a long-term member of Bondi Writers Group. She was President of the group for nearly four years and is currently the Editor of ‘Haiku Australia’. Cynthia is a successful writer of fiction and poetry. See her website at http//cynthiarowe.com.au.  My review of her book follows:

This is the latest book in the Genna Perrier series, following on from Our Hollow Sofa, Ants in My Dreadlocks, and Stinger in a Sugar Jar.

I must admit to thoroughly enjoying this latest one in the Genna series from so many points of view. It has an exciting plotline to picque the interest of any young adult (and young-at-heart oldie!). Other interesting elements include: mystery, romance, humour, strong characters, and New Caledonian cultural, political and linguistic references.

“My French Barrette” follows the adventures of Genna Perrier in the country of her birth, New Caledonia. Two kidnappers bundle Genna into a car and drive off with her, hands tied, in the back seat next to one of the captors. She is powerless to escape, and is taken to an airport and bundled onto a small plane. Her captors refuse to say anything apart from the fact that they are following orders. They land on an island from where Genna is taken by yacht to New Caledonia. Eventually, Genna discovers that the orders have been given by her grandfather.

Genna and her friends are now grown up and involved in careers or tertiary studies. As a result, the school-book humour of the first novel in the series gives way to a more sophisticated, situation-based type of comedy.  A flashback to the old style of humour occurs in the beginning with the “Sorry Sit-in” introduced by way of a typically adolescent email: “ur invited 2 a Sorry Sit-in” from Hetty Geiger, one of the ex-school friends. It turns out that Hetty has probably organised the sit-in for selfish reasons, for a Psych III assignment; Elisabeth is the most forthcoming with apologies, which she dishes out in a seeming torrent. The talk is of boyfriends past and present, and especially of the French lecturer Pascal Manet. Other themes introduced in the beginning are: Genna’s hatred of her grandfather and her anger against her birth mother Sandrine; and the political “events” in New Caledonia.

After a series of tumultuous incidents that would destroy a lesser character, Genna arrives, against her will, at her grandfather’s home in Bourail, New Caledonia, where the inner journey begins. This forced return at the behest of Jacques Forestier enables Genna to sort through the important relationships in her life, especially that with her grandfather, and with her birth mother, and eventually with Namilly, her adoptive mother back in Ravella.

An atmosphere of mystery and of thrill is suggested early on in the novel by the smell of Gauloise cigarettes and by Genna’s nervous feeling that something is wrong. This sets in motion the pervasive theme and question close to, I am sure, many young readers’ hearts: who will Genna end up with romantically? We must wait until the end to find out the answer to this question, and the suspense is reinforced by the long line of men—some of them from her past—Genna meets and has to deal with along the way. She is a strong, resilient and ‘gutsy’ protagonist that young women will surely relate to.

The motif of the French hair clasp (‘barrette’) highlights the romantic theme and pays homage to the mystery surrounding it. The ‘barrette’ operates like a talisman within the novel, representing Genna’s romantic destiny. It falls into Genna’s hands via her mother Namilly, who finds it in the secondhand store run by her friend.  But the fact that Genna holds onto the clasp against all odds, even nearly drowning in the process, points to its role as an important emblem or amulet in the narrative structure. When the mast on the yacht taking her from her island prison breaks, Genna falls overboard, trying to save the ‘barrette’; she continues to clasp it in her hand until she is rescued by Mana, one of her potential love interests.

Cynthia Rowe is particularly good with dialogue. She is able to capture perfectly the cadences and to-and-fro-ing of conversation between adolescents; and later on between Genna and the adults in her life. In pace with her growing maturity, her ability to discourse in a more adult fashion becomes more and more obvious as the novel progresses. The dialogue serves to further the action as well as to underline character and create humour as in the following early example:

“See ya then, Hetty. Good luck with your Psych III experiment.”

“’course it’s a prac experiment!” The banter relaxed me. “You were using your friends.”

“Gonna give me another bise?”

“Don’t overdo it!” My tone was mock-threatening. “One air-kiss from you is more than enough!”

The book ends on a romantic note, which would appeal to a young adult reader. Only at the end do we learn of the real significance of the ‘barrette’ and its true origin. Only then, too, is the identity of Genna’s soul mate revealed.