the Old City is famous for its beautiful ancient monuments 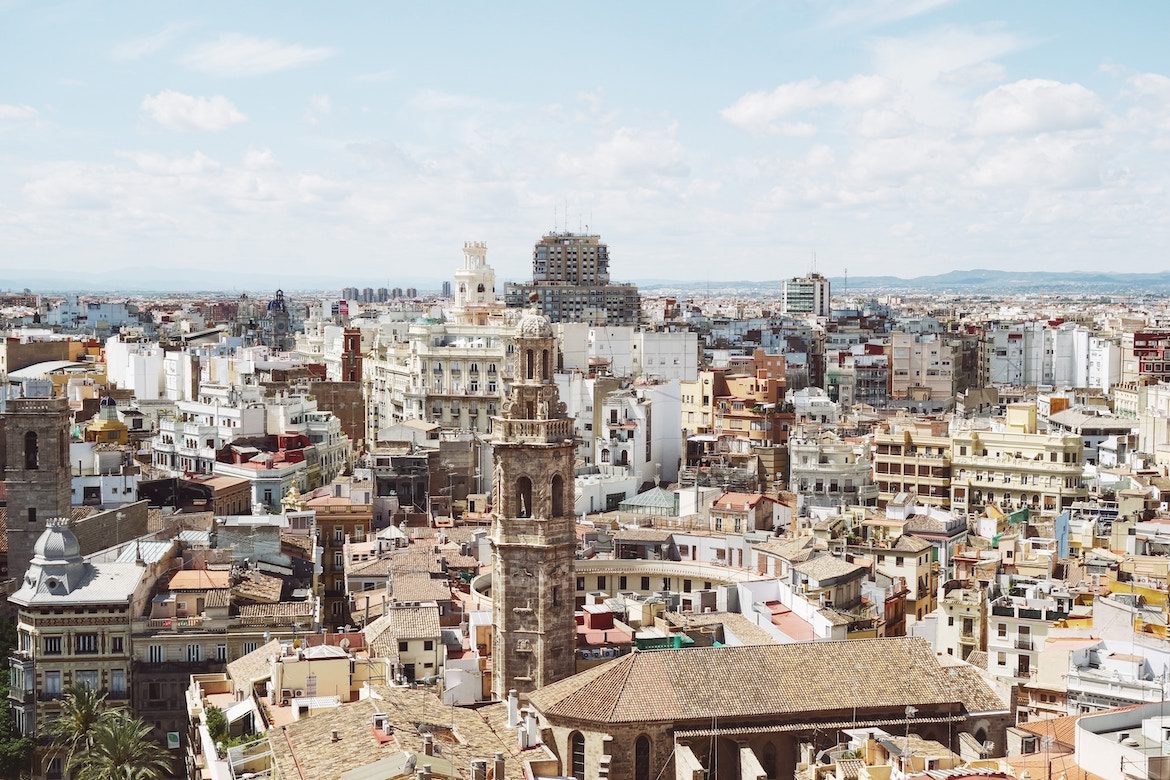 Valencia, on the eastern coast of Spain, is the third largest city. It has a 2000-year-old history dating back to the Romans, Visigoths and Muslims, since it was established in 130 BC. You can catch a bus into the Old Town in the city centre and view the spectacular architecture of the buildings down through the ages.

The Cathedral sits at the centre of The Old Town of Valencia. It is said to house the silver chalice linked to Jesus. We got off the tourist bus at the central Plaza del la Reina, and took photos of the buildings and vibrant scenes surrounding us on all sides. It’s an impressive cathedral that spans a variety of architecture styles, including baroque, Romanesque and gothic.

It was Sunday, and we sat inside the church during a mass. The size of the congregation was impressive, due to the faithful being joined by itinerants such as us. This mingling of crowds did not seem to bother the priest; we basked in the peaceful and beatific atmosphere that churches always instill in one, whether one is part of the religion or not.

The adjoining plaza holds the famous Church of Santa Catalina, one of the oldest in the country. The beautiful and graceful eighteenth century Baroque tower housing the belfry is one of the most picturesque sights in the city. One can admire the five storey construction crowned by a small dome-covered temple. The tower of Santa Catalina is a landmark in Valencia, as well as marking the entrance to the popular markets.

We had lunch in a bistro facing Santa Catalina and admired the lovely yellow facade of an apartment building in the Square. We decided it was a very livable city.

The inside of the Basílica de la Vírgen de los Desamparados (Basilica of our Lady of the Forsaken), Church of the Virgins, reminded me of Stendhal’s tendency to faint and suffer dizzy spells in the presence of architectural and artistic spleandour, which gave birth to the name of the Stendhal Syndrome.

After lunch, we walked around the city in search of the bull ring, where brave matadors and, perhaps, tragically doomed bulls, used to perform for the public. On the way, we came across this building with a lion on its front façade. Beauty everywhere! The Bull ring was silent and, although reminiscent of Rome’s Arena, it appeared to be defunct and of no interest to tourists or to the citizens of Valencia.

The land is flat and the climate of Valencia is dry, with 320 rain-free days each year. A river, the Turia, used to run through the city. However, in 1957 Valencia experienced a devastating flood, which led to a dramatic decision to divert the river and reclaim the land for the enjoyment of the populous. Today, several world renowned architectural monuments stand on the reclaimed land and compete for aesthetic appreciation with the structures in the Old City. Bridges now cross parkland boasting lush greenery with spectacular monuments on all sides for the feast of the eye.

The City of Arts and Sciences is situated at the end of the former riverbed of the river. This majestic building, designed by the Valencia architect and engineer Santiago Calatrava, means that both the city and the Region of Valencia have the best infrastructure available in order to participate in international circuits, especially those of opera and major musical shows. The Hemespheric, also known as the planetarium or the “eye of knowledge,” is the centrepiece of the City of Arts and Sciences.

Another striking monument is the garden of palm trees enclosed in an aesthetic structure that showcases it to tourists and locals.

The Beach and Marine Culture

We stayed in a boutique hotel on the seafront, just outside the main city centre. It was close to the pleasures of the coast, including sea bathing and lots of restaurants. It was in proximity by bus or bicycle to the centre and other parts. People in Valencia seemed to be always on the point of breaking into song or dance, and the sound of drums and music could be heard across the seas from a far-off nightclub that was open from dusk until dawn. I walked and cycled around the area. Others choose to ride electric scooters or to catch buses. Close to our beachfront hotel was the marine area that spoke of a past history of a seafaring nation. I admired the marine decorations on some of the older buildings as I explored the area.

Valencia is the birthplace of paella, the saffron coloured rice-based dish that requires special knowledge and culinary skills on the part of the chef in order to perfect it. In the beach area and in the Old City, restaurants serving seafood, chicken and mixed paella dishes abound. We tasted several superb dishes while in Valencia, and Mark is now motivated to invest in one of the shallow pans, and some saffron, in order to try his hand at cooking the dish once again. Our favourite eating place was a plain tapas bar near our hotel. The fact that it was frequented by lots of locals was a sign for us. Our instincts proved right, as it was friendly and good. We ordered two small pans of Valencian and Seafood paella that we shared between the two of us. It was delicious and inexpensive.