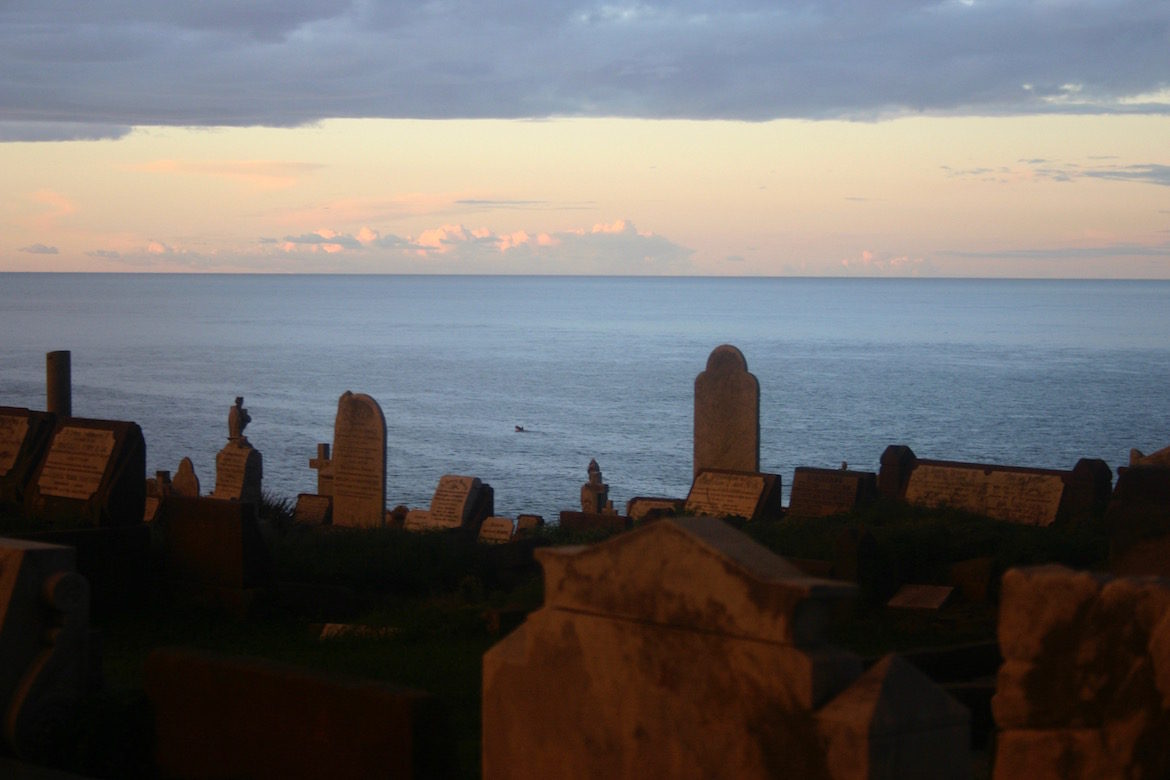 Editor’s Note: One factual error, discovered by the author’s older brother, (“Her own husband had fallen hostage to the demon drink”), has been removed.  It was the brother of Kitty Walker, named James, who became addicted to alcohol, not the husband (also James) of the Elisabeth mentioned in this post. (Explained on page 90 of A Little Bit of Irish.)  The greater part of this post is/was “true”.

I’m re-publishing this post, with modifications, from two years’ ago. My cousin and I are about to embark on a search for more in-depth information about her deceased mother’s early life. For this reason, I shall revert to real names in this post. We are hopeful of finding anyone who knew Kitty Walker’s daughter, and who can fill in the many gaps about her life in an orphanage in Sydney and beyond. Our next step will be to widen the search, utilising orphanage and ancestry sites and records contained within.

I’m lying in bed feeling sorry for myself when I receive the message. It’s ten days since I caught this virus from, guess who? my significant other. The first flu I’ve had for years and, guess what? It went straight to my newly 20/20 vision eyes…  Just after having cataracts removed. Yes, nowhere else but there! Until today, when I felt nauseous and knew it wasn’t from “you know what”…  Perhaps the tummy ache is a good sign, the last kick of the virus before it leaves for good…

Positive—bitter/sweet—things have been happening, too.

The granddaughter of a long deceased common relative has got in touch with my sister and me. To find out about her ancestors, especially her grandmother, my great-aunt, Catherine Veronica (Walker) Smith (9/11/1886-25/5/1951). She was living at the Peoples’ Palace in Sydney when she died, and was buried at the Botany Cemetery. She’d married Arthur Edward Smith on 14/9/1932 and was living with him at 309 Crown Street, Darlinghurst for the first years of their marriage and for some time after Beth’s birth, as far as we know.

My great-aunt had always been known as Kitty Walker in my extended family in Grafton. The photo below is of Kitty performing in a musical The Absent-Minded Beggar, published in my brother’s genealogy book A Little Bit of Irish (author William Skyvington). 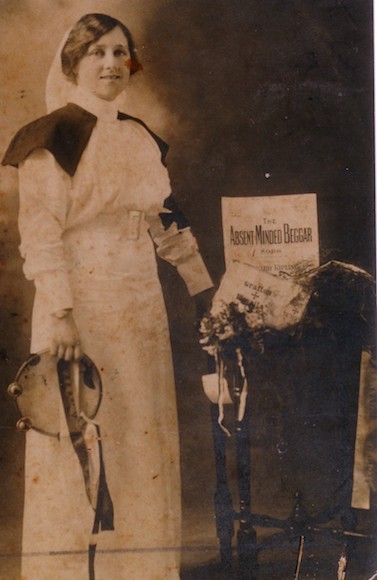 Catherine Veronica Woodhouse is the name of this cousin who got in touch via my brother William in France.  She is Kitty’s granddaughter. Let’s call Kitty’s daughter “Meg”. No, let’s give her her real name: Elisabeth Mary (Walker) Smith, known as Beth. She was brought up in a Catholic orphanage in Sydney and became a “work horse” for the nuns, according to Catherine. She died, not surprisingly, quite young, after getting married and having a family of four, including Catherine.

Kitty was Mum’s aunt, the younger sister of my grandfather, Charles Herbert Walker, both of whom I never knew.

The photo of Mum and Dad, below, with a young child, was taken at about the time poor little Beth was being placed in the orphanage at age seven or so. The child in the photo is my mother’s younger sister, Nancy. I guess that she would have been about the same age as Beth at the time.

Mum used to speak glowingly about her Aunt Kitty, praising her for her acting skills, her artistic strengths and her ability to sing well.

Creativity runs in our family—passed on in the genes—a gift often accompanied by high intelligence and, sometimes,  artistic fame. It also goes hand in hand with emotional problems—even mental illness—for many people blessed and cursed by this gene. Alcoholism is, not surprisingly, another demonic confidante of creative individuals. 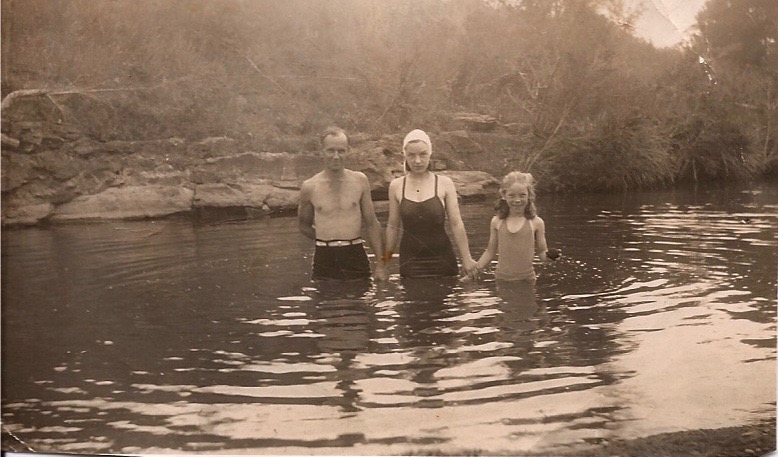 Kitty must have had the child Beth late in life, possibly in her forties. Her husband was much younger, and was the person who signed her burial record.

No one in the extended family seemed to know about any of this at the time I was growing up in Waterview, via South Grafton.

It’s rewarding when you feel a past hurt is able to be soothed a little by your actions. What hurt, you might ask? Some people in my extended childhood family refused to give answers when the adult woman, Beth, came begging: not for money, but for information about her family tree.

“This Kitty Walker ended up in the gutter!” I imagine this gruff utterance from the dairyfarming uncle, who was, himself, the product of a “shotgun marriage” and a hasty elopement. “The daughter’s no doubt from the same litter, only wants a handout from us,” he scowls, thereby closing the matter against his mother’s and sister’s wishes.

It all boils down to ignorance, to projection, and to shame. This withholding of information leads to more ignorance and false assumptions further down the track. Yes, there was alcoholism in our family, but the shame was so much greater in this case, at that time, because the sufferer was female.

Thank goodness I experienced the coming of the Women’s Liberation movement in the late sixties and seventies in Sydney.

Emotional problems accompanied by alcoholism, are often signs of an amazing gene—or a cluster of genes—shared by many creative people like Kitty Walker: the artistic ones!

Carl Jung claimed that addiction to alcohol—spirits— is a sign of spiritual yearning.

So it’s back to Ancestry searches, emails and telephone calls for us, to try to fill in some missing gaps.

What we know so far:

Catherine Veronica Walker, born 1886 in Grafton NSW, Australia, was artistic and a singer, and was, possibly, active in the campaign to get Sir Earle Page elected into parliament. She had a vibrant social life before, perhaps, becoming addicted to alcohol at the hotel where she lived. She was brought up by her aunt, who ran the Walkers’ Hotel in South Grafton. Kitty worked there as a barmaid for some time. That is where she met her future husband, Arthur Edward Smith, the father of the child, Beth. 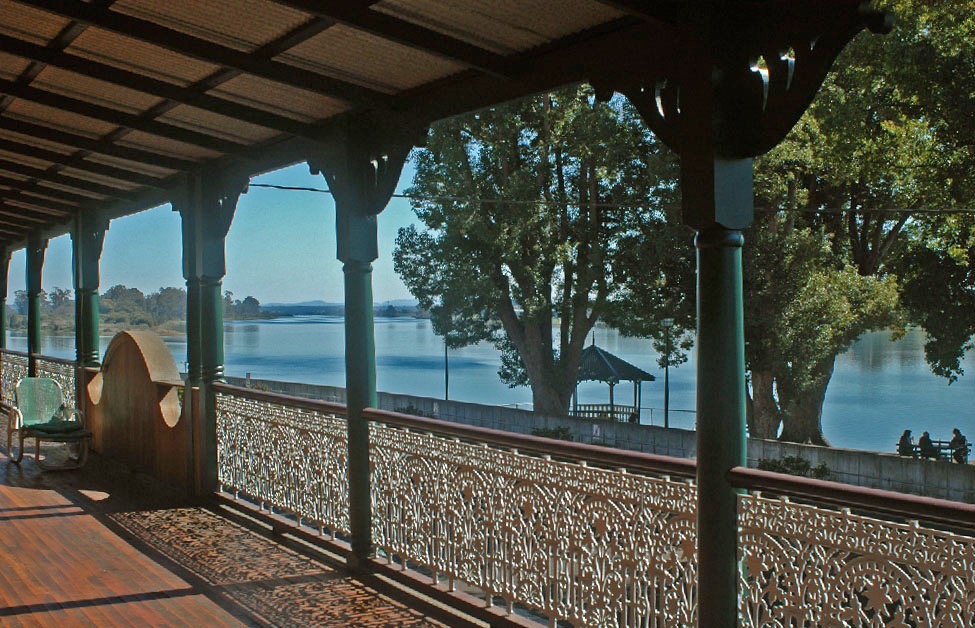 What we want to know:

When, where and why was Elisabeth Mary (Walker) Smith, known as Beth, placed in a Catholic orphanage? What were the circumstances of her life before, and soon after, leaving the orphanage? How did she find out about her Walker relatives?

Catherine has since visited Walkers’ Hotel where her grandmother lived and worked. She had a sense of Kitty’s presence when she stayed there, and was able to glean a little more information about her ancestor from the hotel staff.

The widowed publican, Kitty’s aunt, Elisabeth Walker, was known to send men home to their wives if they had drunk too much.

Only recently have my newfound cousin, Catherine and I, discovered where Kitty Walker lies buried in an unmarked grave at Matraville Cemetery. (See video below). We visited the cemetery where Kitty was buried, when Catherine came to Sydney from Queensland, and we laid flowers on the grave.

Here is a video of Cath and me searching for the unmarked grave at the Matraville Cemetery. It took us two visits to find it.

Looking for Kitty Walker’s Daughter was last modified: November 21st, 2019 by Anne Skyvington
alcoholism and its linkage with emotional problemslinkage between creativity and mental illness.searching for ancestorsstigma against alcoholism in women
4 comments
0
Facebook Twitter Google + Pinterest

Hi there.
I am unsure if i have any information you seek but i beleive i may be a relative of Kitty Walker. I am willing to talk to see if i have any useful information in my family history documents. If it was the same person, kitty was my grand mother’s cousin. Was Kitty’s mother named Isabell? Thanks

Hi Shell,
Can you email me any information that you have. You may be related to the family.
Thanks,
Anne Skyvington

Hi Shell,
You may be related to the family. Can you send me any information that you think might be relevant?
Anne

Hi cuz,
It’s been awhile since you have written this family tail.
My plea,is to ask anyone, no matter how small the information might be,please don’t hesitate to past it on to us.
Kindest Regards, Catherine Veronica Walker Smith’s granddaughter,
Catherine Veronica Woodhouse.